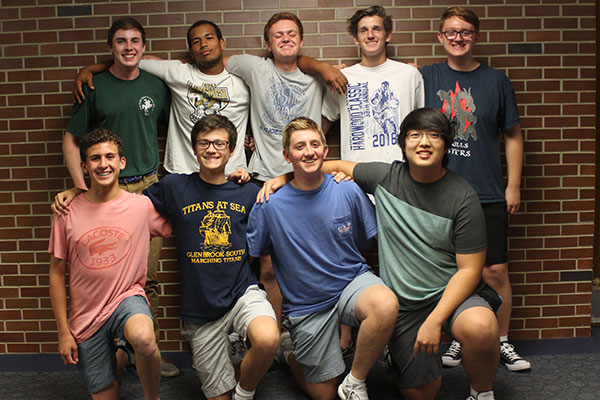 From singing onstage at the variety show to circling the lunch tables on Valentine’s Day, the all-male a capella group, Nine, puts their own special twists on musical numbers, according to co-choir Director Andrew Toniolo. Toniolo explains the intent behind the formation of the group, which was to encourage more male involvement in the choir program.

“Singing is a very exposing thing and I think it goes against the grain of what a guy thinks [he’s] supposed to do,” Toniolo said. “You have to show your emotion, you have to move and be sentimental. [I think that] sometimes for a teenage or middle school boy, that’s not what [he thinks he’s] supposed to be doing.”

Toniolo also says that after the group was established in the early ‘90s, it began to take off and become more widely known. The musical arrangements created largely by Marty Sirvatka, former choir director, played a role in Nine’s success, according to Toniolo.

“Eventually [Nine] was one of the things that helped grow the choir program,” Toniolo said. “Taking that over is a huge responsibility for me [and] is an honor as well, but it certainly comes with a lot of challenges and a lot of cool traditions to uphold as well. It is one of the fibers here in Glenbrook South.”

Senior member Jack Taylor recalls the first time he encountered the group, which was at the fall concert during his freshman year.

“I was just sitting there in the audience and then all of a sudden the Nine guys just walked up onstage and they started doing their stuff,” Taylor said. “I was so blown away and I was like, ‘That’s what I want to do when I’m older in highschool. I want to be a part of [Nine] because that group seems awesome.’”

Taylor says he first began singing in sixth grade when he heard his music teacher singing and wanted to be able to sound as good as her. Since then, Taylor’s goal for each year has been to improve both as a person and as a musician. According to Taylor, Nine has begun to get to know each other in their first rehearsals this school year.

“You are with these people for such a long time, you just sort of grow into a […] family of your own,” Taylor said. “You are a smaller group of people and you get to see those people once a week. It is [very much a] group effort and I feel like if one person is gone, it’s like   half of us [are] gone almost.”