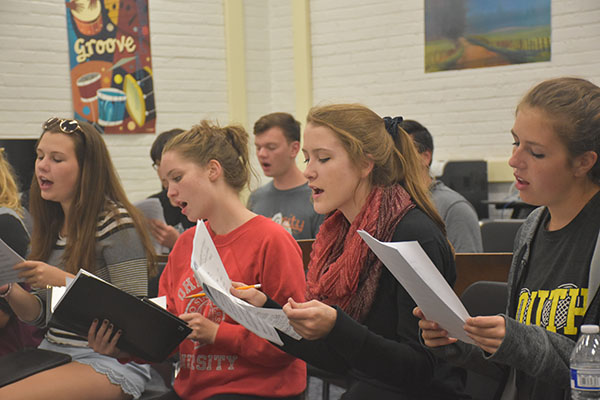 CHIMING CHAMBERS: Singing intently, (from left to right) juniors Steph Ornduff and Becky Jacobson, along with seniors Erin Kirby and Rachel Shwartz, prepare for future shows they will perform in within their a capella group, Chambers. This ensemble is best known for their old fashioned clothing and seasonal songs.

For many South students, the holiday season consists of decorating the lawn with lights, cozying up by the fireplace, and, of course, listening to the voices of the Chambers members as they carol their way through the community. Dressed in their hoop skirts and cravats, Chambers is one of South’s a cappella groups and is trademarked by their Christmas carols and Old English attire.

According to co-choir Director Robert Shellard, he was a two-year member in the group himself during his own time at South. Among the traditions that Chambers has carried over the years, Shellard says that one tradition he enjoyed participating in was the Gazebo Sing, an event in which Chambers alumni join and sing together near Thanksgiving.

“Coming back as an alum, it’s always fun to see the people that you sang with and to sing songs that you haven’t been singing for a while,” Shellard said. “In Chambers as a student, you forget that you’re not always going to have this [group]. It was fun to just come back with people and sing the music you know inside and out.”

For senior Zach Adams, this will be his second year in Chambers. According to Adams, his involvement in the group has allowed him to create bonds with the members of his group and has helped him develop his singing technique.

In addition, Adams recalls a certain performance from his junior year, where Chambers visited a hospital to sing to the patients, that was particularly impactful.

“After we finished singing, one of the nurses came up to us and said that one of the patients had previously [wanted] to take her life, but after she had heard us sing, she had decided to reconsider that option,” Adams said. “That was an amazing experience for all of us.”

According to Adams, this encounter widened his perspective of music and led him to a deeper understanding of what the group itself embodies.

“Our singing is not just us going around in funny dresses and outfits and singing to people, but it’s actually having an effect and touching people’s hearts in a way that we might not understand now but later, hopefully,” Adams said.