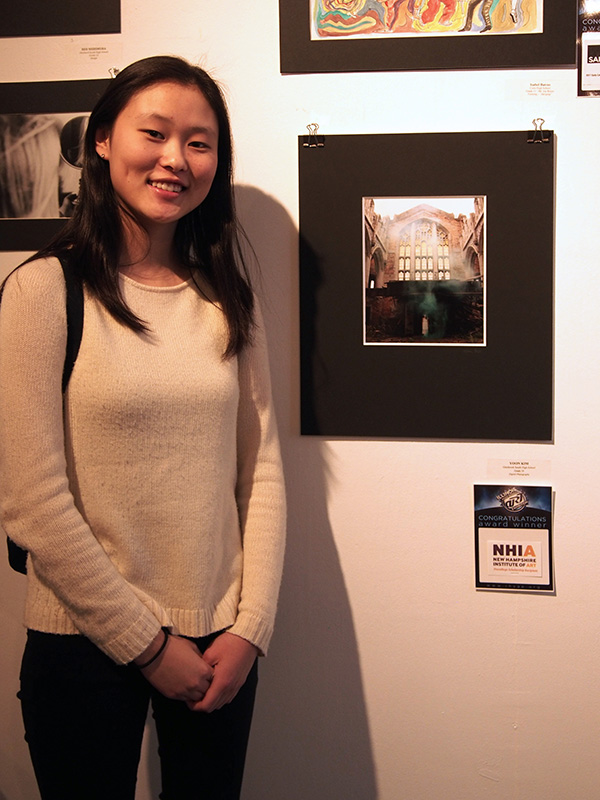 SMILING FOR SCHOLARSHIPS: Posing in front of her Illinois High School Art Exhibition (IHSAE) photo, sophomore Yoon Kim shows her submission entitled “Beauty in Decay.” At the competition, Kim received a $1000 scholarship to attend a summer workshop at the precollege of the New Hampshire Institute of Art.

Art, according to French artist Edgar Degas, is not what you see; rather, it’s what you make others see. Seniors Dasha German and Jiyeon Lee, junior Kaya Dlouchy, sophomore Yoon Kim and freshman Sara Keaton displayed their artwork in the annual Illinois High School Art Education (IHSAE) exhibit, which took place on Feb. 25 at the Zhou B. Art Center in Chicago.

Unlike most other art exhibits, this one includes students from all over the state, art teacher Natalie Ingaunis says. According to Painting Teacher Stephanie Fuja, the IHSAE exhibit takes place once a year, ranking as one of the highest level art shows in high school. She adds that over 110 high schools in Illinois participate in hopes of receiving recognition, awards and thousands of dollars worth of scholarship money

“[ISHAE] is awesome for [the students] to see their work displayed in a gallery setting,” Fuja said.

As far as the submission process goes, Fuja and Photography teacher Amie Elliott explain that the fine arts teachers choose a total of 25 pieces of art and out of those, five are selected by the IHSAE program to be displayed at the exhibition.

“We [choose] the [artwork] we are impressed by that have great characteristics that we think would be a good fit […],” Elliott said.

According to Ingaunis, it is tough to decide which pieces she and the other teachers will choose to be a part of the art exhibit. However, there is a way to decipher the good works from the great works, Ingaunis says.

“[The selected artwork] looks like it’s made for the sake of producing art, not for fulfilling a project requirement,” Ingaunis said.

This art exhibit is not only for exposing the artist’s capabilities, Ingaunis explains, but can also be a chance for the students to receive college scholarships. She also says that a variety of schools and universities offer scholarships and workshop opportunities  to students that they see potential in.

“[The exhibit] is a great boost for [students’] self-esteem,” Ingaunis said. “It gives them motivation to keep producing art and challenging themselves to work at a higher level and keep reaching and thinking outside of the box.”

For sophomore photographer Yoon Kim, this experience opened the door to a world full of possibilities. According to Kim, a hand full of students received small amounts of money such as $100 or $200, while a few others offered larger amounts of money. Kim explained that she was happy to hear that she had been selected to be a part of one of a collegiate summer program for artists, which is another component colleges will offer to the students.

“I felt really happy and thankful that GBS had this kind of art program where I could really benefit from my hard work,” Kim said.

Kim explains the picture she took caught the eye of many people. The shot was of a high school girl dressed in a white dress standing in front of a broken down church.

“I think it’s cool to see that, through my picture, there can be such beauty in decay,” Kim said.

Junior Kaya Dlouchy says she was shocked when she found out that her ceramics piece, “Ship of Fools”, got into the exhibition .

“My boat has one person inside of it and he’s kind of fat and on the outside it says ‘all are welcome, everybody’s okay,’ but there’s nobody else [in the boat], he’s the only person in there,” Dlouchy said. “It was kind of showing how people in high places don’t really take minorities into consideration and how everything is supposedly okay, but it’s really not ,and nobody’s doing anything to help anybody.”

Dlouchy further explains her piece as political commentary, focusing in on specific pre-election concerns that still hold true to today.

“I was commenting on social issues and this was before the election, but it sure does work with everything that happened lately,” Dlouchy said.

Dlouchy explained that she felt a great sense of accomplishment receiving this award for a piece that expressed her own ideals and beliefs.

“It was such a surprise [to me] that [my piece] placed an award because there were five other [ceramics pieces],” Dlouchy said. “[When I won the award], I was thinking ‘why am I up here,’ and then I got third place… I was just in awe… it was ridiculous.”

According to both Dlouchy and Kurt Webb, Advanced Ceramics teacher, Dlouchy’s message depicted in her boat may have helped her in the award selection portion of the gallery event, earning her a bronze medal.

“I do think that because [my ceramics piece] had a strong message, that  might have put me up there [to win an award],” Dlouchy said.

According to Kim, her lasting impression at this year’s art show was the size of it; it was a lot bigger than the other shows she’s gone to because this one featured art from all over Chicago.

“It was definitely cool to see how there were so many different talents out there and so [many] more kinds of things people could do,” Kim said.

According to Dlouchy, she saw many pieces at the gallery that inspired her and gave her ideas for future artwork.

“I hope that I do this for the rest of my life,” Dlouchy said.