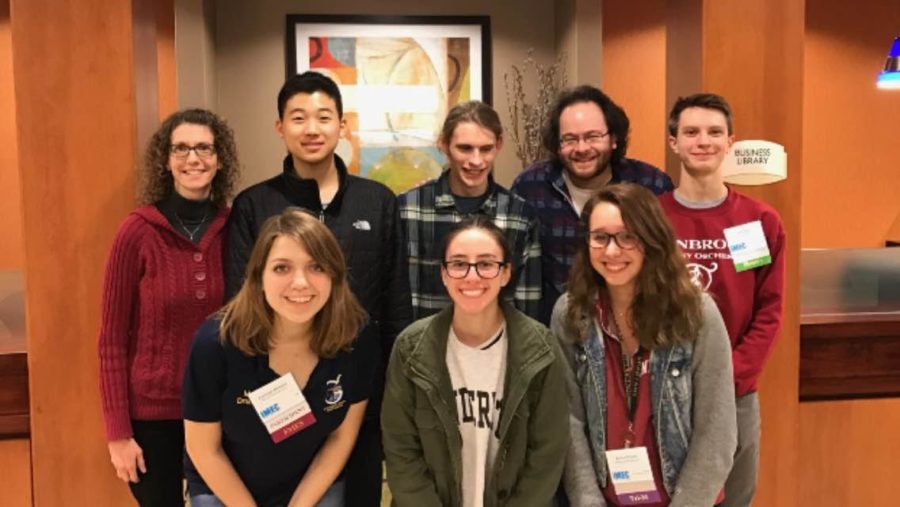 Hundreds of students stand together and sing in harmony while conductors lead ensembles. Are we at the Chicago Symphony? No, we’re at the ILMEA state festival, where high school students pave the way to their future in music.

According to Andrew Toniolo, co-director of choirs, the Illinois Music Education Association (ILMEA) is a festival in which the best high school musicians and singers go. There are two different festivals that go on: the district festival and the state festival. The state festival happens once a year and, as a high school student, it is the highest honor that a performer can receive, according to Toniolo.

“You can think of it as an equivalent to a state championship,” Toniolo said.

Students get accepted into the state festival based on their audition score. However, that is the only individualized part of the process because, once the students are accepted into the festival, they play or sing in an ensemble with other students, which is led by a conductor, according to Toniolo. Toniolo says that the ensembles are full of highly acclaimed students and collegiate or well-known conductors, so everyone that goes to the festival deserves to be there.

“This big all-star team [of high school musicians] under the direction of [an] all-star coach will rehearse together, and then at the end of the festival, perform a concert,” Toniolo said.

The festival was a lot of fun, but took a lot of time and effort, according to junior  violin player Andria Radaios who went to the festival. According to Radaios, on one of the days, they had to get up at 5 a.m. for rehearsal which didn’t end until 5:00 p.m. . While Radaios says the workload was heavy and many of the students there got very little sleep, she explains that the festival was fun because the music was better than it was in previous years, and there were a lot of new people to meet.

“My favorite moment was probably the concert because we were working for so long, and it finally came all together,” Radaios said.

Going to this festival means not only improving your musical skills, but also getting the chance to meet high school musicians from various different schools, according to sophomore Jack Sundstrom. Sundstrom made it to the state festival for his accomplishments in music composition, and he says the state festival was an unreal experience because everyone there was equally passionate about music.

“It was really cool because, when I write a piece, I have an opinion on what I think it is and what I think it should be, but then someone else hears it and they bring a totally different viewpoint,” Sundstrom said.

Toniolo estimated that 1,800 students attend that State Festival each year. Because of the amount of talented kids, the students always try to make a good impression by showing people what they can do, according to Toniolo. However, Toniolo says the atmosphere of the festival is not competitive or tense at all, rather, it is an atmosphere of celebration because every student that makes it into the festival is already really good at what they do.

“This is the highest honor a student can achieve, so therefore they have nothing left to prove,” Toniolo said.

For Sundstrom, who hopes to go to Berklee College of Music and become a composer-conductor someday, he says this experience will be really helpful for the future because students had a chance to talk to different colleges, many of which were very appealing. He believes that making connections with the collegiate conductors there will end up helping the students in the process of getting into a good college for music.

“I got a better feel for what (college) would be like and all the opportunities I have open,” Sundstrom said.

While colleges may not actually go to the festival and ‘scout’ the students, just being a part of this festival with other great musicians, singers, and collegiate conductors will help the students if they plan on continuing music in college, according to Toniolo. He says that a lot of the time, the kids that end up going to this festival are the ones that want to continue their musical career post-high school.

“For those type of people that want music to be a part of their lives after high school, they find this experience to be one of the best ones,” Toniolo said.