Each issue, Artist Alert features a different creative and talented aspiring artist or entertainer in the GBS community. 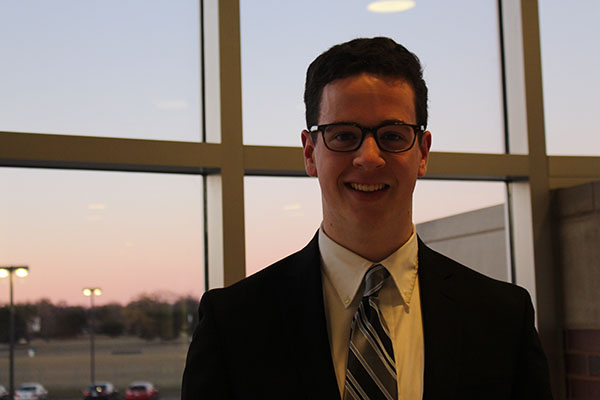 Senior James Neuson is co-captain of South’s speech team. Speech team is an activity where a student takes either an original piece of writing or one written by someone else and performs it in front of an audience. This activity allows its participants to partake in competitions, where they are judged on their ability to convey a message and their skill in front of an audience.

What skills have you acquired from speech?

What are some common misconceptions people have about speech?

“People usually think we are debate. You say ‘speech team’ people will say, ‘Oh, you mean debate?’ But no, we are our own entity that focuses on it’s own thing. That’s the one big misconception… Debate is debating. We are under the same series, so our national competition is both speech and debate, but debate is more about arguing and developing points … but speech is about you and the audience, one on one, performing and delivering a message.”

What challenges does someone on speech encounter?

“Being able to take a piece, or take a piece of your own writing, and then […] whittling it down to something that’s able to captivate an audience, keep them interested and make it all work so that an audience believes you are a great speaker.”

How does speech differ from English classes?

“It’s all about presentation. There are poetry events in speech as well, but other than writing your own pieces, you take poetry from a selection of authors or just one author and then you try to get it to be the best presentation that you can pull off. You have to put all these mechanics in, it’s all a presentation, to deliver a message.

How does your involvement in speech change and impact your everyday life?

What is the most interesting speech you have written/performed?

“One of the most interesting pieces I performed was a piece of prose that I did last year. It was a comedic short story about this family that is incredibly competitive with their neighbors. They get into this competition over who is the most charitable and they end up giving away their entire lives to ‘one up’ their neighbors. It was pretty strange, but I enjoyed doing it.”

In what ways do you think speech can be considered an art form?

“It can be considered an art form because you are able to take other people’s work, or your own work, which in itself is art, and you’re able to create this artistic speech out of it. It takes a lot of skill. It takes a lot of different factors, you need a lot of creativity to excel and innovate in speech. It’s such a huge labor, but it really is an art form.”