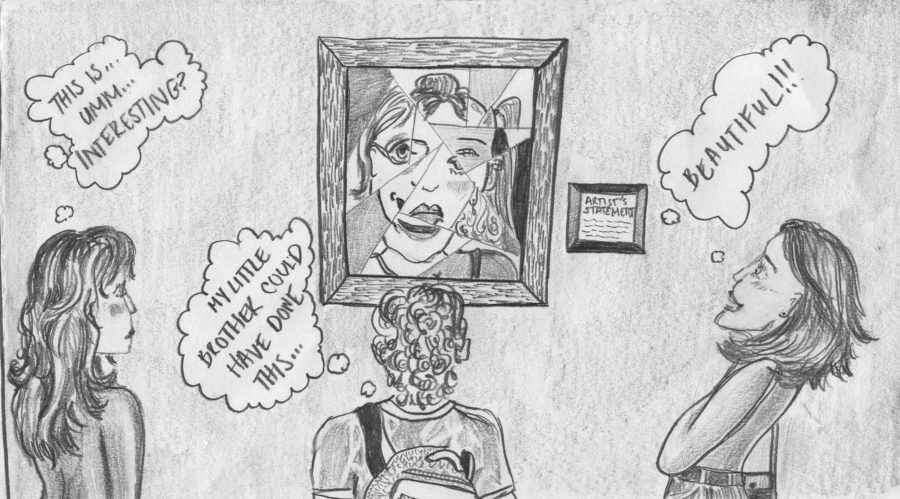 Art. A single word that can describe the seemingly effortless strokes of a paintbrush or the smooth sound of a singer. In a non-scientific Oracle conducted survey, out 291 students 77 percent said that art impacts them. But what is art?

Co-choir director Daniel Ermel compares art to a family where the different aspects of art are similar to cousins. Though they may not communicate with each other as much as they should, at the end of the day, they are still family.

According to Art teacher Stephanie Fuja, self expression is a common theme in the quest for the meaning of art. She explains that art stems from her own being.

“Art for me is a way to express and expose that side of me in a way that I want with no restrictions or boundaries,” Fuja said.

For senior Nurul Hana Mohammed-Raffee, whose free time is filled up with painting, drawing, speech and theater, art is a way to spread a message to the world.

For sophomore Jack Sundstrom, member of jazz band and orchestra, playing music allows him to channel emotions. He explains that when he writes music, his main goal is to share his personal views on something or capture a feeling.

“I think every piece brings about its own different emotion,” Sundstrom explains. “If you’re doing original music, then it’s pouring your emotions […]. If you’re performing something […] by someone else, then it’s trying to draw out the emotion they were feeling when they wrote it.”

Sundstrom’s music expresses his views on a range of topics like politics.

“Music is the supreme force of peace,” Sundstrom said. “[Music has] the potential to really bring people together. Music inherently has no competition. It’s something we can all agree on as people. It has the potential to change the world.”

Ermel elaborates on this point, explaining how another powerful aspect of art is its timelessness. He explains that, for example, a painting like “Sunday Afternoon on the Island of La Grande Jatte” is still as alive today as it was the day it was created.

“Somebody can go to the art institute downtown and see something created in China 28 hundred years ago and feel something,” Ermel said. “There’s life in something inanimate, and I think that’s really interesting.”

For people whose life is not greatly influenced by art, Sundstrom explains all people have something in common: a passion. According to Sundstrom, the way he feels about art is the exact same feeling other people feel about their respective interest.

“I think everyone has their calling in this life, mine happens to be art,” Sundstrom said. “For some people it’s sports [or] other things […]. Art is mine.”

Mohammad- Raffee explains that, although her friends may not relate to the impact that art has on her, they notice the happiness it brings her.

“I feel like eventually you don’t have to say anything [to people whose lives are not impacted by art],” Mohammad-Raffee said. “They see how much happier you are with your expression or they see how much it impacts you.”

For Fuja, it is not the fact that art doesn’t impact people that is bothersome, but the idea that people think they are incapable of doing it.

“I always tell people, if they don’t think they’re capable of doing something that looks aesthetically pleasing […] you can [as long as] you want to and you’re taught right,” Fuja said. “I think everyone is teachable, if they want to be taught.”

Ermel added that another powerful aspect of art is its diversity. According to Ermel, no matter who you are, you can find something in art that appeals to you.

“I think, as a whole, art is really underappreciated, but […] there’s [something] for everybody […] it’s just taking the time to realize [it].”