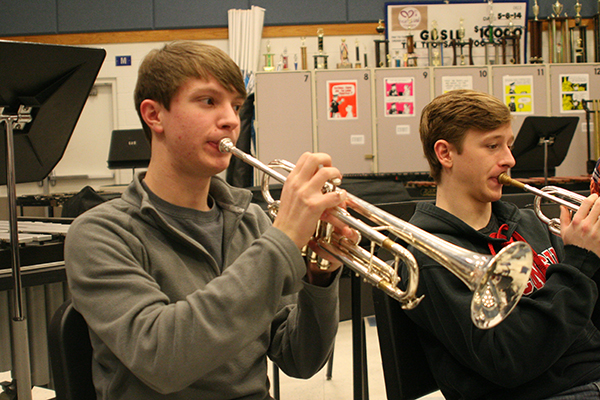 Trumpeteering during a morning Jazz Ensemble practice, junior Jack Kelly performs his piece alongside senior Matt Grinde. Kelly made ensemble his Sophomore year, and has avidly remained a part of the entire music department.

Whether he’s playing trumpet in band, GSO (Glenbrook Symphony Orchestra), or on Sunday mornings at church, junior Jack Kelly does it all. Even throughout his countless hours of practicing and performing, Kelly always has a great spirit and attitude, according to GSO director, Aaron Kaplan.

“He loves music, and he just has a great attitude,” Kaplan said. “I think he works very hard and he has a terrific work ethic that many students exemplify, […]. I think he is [someone] who has a really good work ethic and love for music.”

According to Kelly, there wasn’t a definite reason behind choosing the trumpet seven years ago.

“I don’t really have a reason for why I picked the trumpet,” Kelly said. “I almost picked saxophone, but I chose the trumpet instead because I have access to a lot of plastic, colorful mouthpieces. My dad’s cousin owns a business.”

According to trumpet player Jean Paul Rodriguez, Kelly has improved greatly since fourth grade. Kelly went from being a timid, discouraged player, to being authoritative and being able to play in all ranges, for any style of music, Rodriguez explained. According to band director Greg Wojcik, Kelly has natural abilities that have helped him improve since middle school.

“He works hard at what he does,” Wojcik said. “He practices, he’s diligent, […]. He’s just a quality performer who has a good concept of the style that he’s playing; whether it’s jazz, symphonic winds, or orchestra, he can cover all of the styles.”

According to Kelly, it was his first year in middle school when he realized that he was a talented trumpet player.

“It was in sixth grade in the Springman Jazz Band,” Kelly said. “There was a solo for the trumpet section and the band director has us all play it to see who should [perform] it, because no one was very good at it. Then, she asked the rest of the band who they thought should play it and they all pointed at me and I thought, ‘Oh yeah, that’s cool. I’ll do it. I’ll have fun with it.’”

According to Kaplan, he has never seen Kelly get nervous before or during a performance. The ability to play like a professional is a huge sign of maturity and shows that Kelly is a strong musician, Kaplan explained. Throughout the many solos that Kelly has performed with the numerous groups that he is a part of at South, he never failed to sound good, Wojcik added.

“One time, I was in the audience and he was performing a solo with the district orchestra as the first chair player,” Wojcik said. “I was really impressed and proud of him.”

According to Rodriguez, the key to Kelly’s success has been his patience. Kelly likes to take his time while practicing and make his music as perfect as possible, Rodriguez explained.

Kaplan said, “I think that a lot of younger students look up to him because he has a great work ethic. He works really hard, and I think he’s a great model for younger students to see that, especially in the music program where there’s so many things going on […], and there are so many chances for younger students to take. He’s always got a great attitude, I’ve never seen him get mad or flustered over something. He just kind of takes it in and is able to process it really well.”

According to Wojcik, music is one of the biggest parts of Kelly’s life. When Kelly isn’t at school practicing for jazz band or a variety show act, he is musically enhancing worship services along with his church band.

“I’m not the most religious person, but I have fun there,” Kelly said. “It’s not very professional, but we always have a good time. […]. It helps because we have ‘jam’ sessions, which really aren’t jam sessions. We just play random notes. But I’ve been able to figure out how to do more improvising and just learning a different style of music, because many people might think that church is just like everything else, music-wise, but it’s kind of different.”

According to Rodriguez, as a part of the trumpet section at South, Kelly is a great teacher and has been influential to everyone in the section.

“I’ve learned [from Kelly], that being humble and being under the radar is better,” Rodriguez said. “He’s shown me that because none of us expected him to be first chair, and he has shocked all of us and he’s just done great things.”