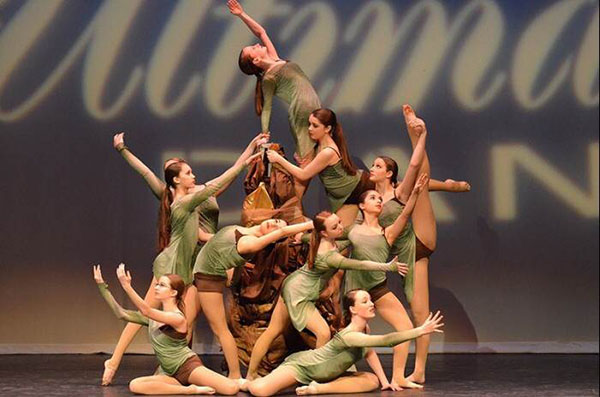 REACHING FOR SUCCESS: Performing with the Allegro Peformance Dance Company, South students Bridget Fogarty, Grace DeBois, Becca Zlotowitz, Megan Sullivan and Annalee Tvorah demonstate their artistic skills and techniques in their rendition of “Heritage”. Many students enjoy performing with dance companies because of the comaraderie and opportunities that come along with it.

People connect to many aspects of art. Many South students dedicate their time to the art of bending their legs and twirling to the beat. Several students are involved in dance companies outside of school and commit themselves to their craft. According to students in dance companies, dancing has given them an opportunity to have fun, build relationships and increase their confidence.

Junior Devin Rachiele currently dances in the Allegro Performance Company. She says she first started dancing when she was three-years-old and grew to love it.

“I feel like every mom puts their daughter in a ballet class, because it’s cute to see them in all the little tutus and stuff,” Rachiele said. “That’s how I got involved, but then I really liked it, so I just stuck with it all my life.”

Rachiele says that her company does various types of dances, including pointe, jazz and contemporary dance. She believes that there is an important connection between dancing and storytelling.

Sophomore Allison Krolopp agrees with the idea that dancers have to be storytellers as well.  Krolopp has been dancing with the Center Studio Dance Company for many years and enjoys this aspect of dance performances.

“When you dance, you can’t just do it with your legs and arms; you have to use your face too,” Krolopp said. “It makes the performance seem a lot better.”

Like Rachiele, senior Bridget Fogarty is also a member of the Allegro Performance Company. She says she has been with the company for eight years, and it is a big part of her life because of both the time commitment and relationships she has developed.

“Sometimes [the time commitment] is nine hours a week, sometimes it’s seven,” Fogarty said. “If we have things on the weekend, like performances, it will be more time. Competitions will be a whole weekend event.”

After hours of rehearsing, the time comes for dancers to showcase their talent and perform. Rachiele says that while she does get nervous for her dancing performances, she tries not to focus on the audience but rather on her dance sequence and the music.

“When I perform, I don’t even feel like anyone is there, even if there are hundreds of people,” Rachiele said. “It’s just such a personal experience, and my mind [races].”

According to Krolopp, participating in her dance company affects her daily life and her personality. Dancing has been a major part of her personal development.

“Dancing improves your presence around people and confidence,” Krolopp said. “It’s just something that’s entertaining, and it helps you express yourself.”

Junior Rafi Surani is a part of the dance group Midwest Masti. According to Surani, this group mainly does Bollywood dances. He said his first performance with the group was very memorable.

“There was like a couple thousand [audience members] , [and] it was my first [performance],” Surani said. “That’s probably the most scared I have ever been because everyone was just staring at me. I was really nervous especially for the [part] that I was in the front of the line for. [The dance lasted] about 10 minutes, but once it started, I completely forgot about all my nervousness, [and] it all went away. That was probably one of the best moments of my life finishing that.”

According to junior Cammi Davis, a member of the Sheila Tully Academy of Irish Dance, one challenge of dancing is receiving scores from judges in competitions. She feels that the critiques are difficult to take but helpful.

“It is really hard, especially in my age group, to do well in competitions,” Davis said. “While I have the support of my entire company, it is really hard on myself when I feel that I am going to do really well, [but] the judges don’t think so. ”

Performing and receiving good feedback is one of multiple rewards of dancing. Apart from receiving feedback from the judges, Fogarty also enjoys feedback and support from other dancers on her team. According to Fogarty, she has built good relationships with her fellow company members.

“I like the whole ambiance of the studio, because I have been dancing with these people since I was in fifth grade,” Fogarty said. “We have kind of grown up together. You have your school friends, you have your family, but then you have your dance friends, and that’s a nice place to escape to whatever you are dealing with.”

Davis says that she feels proud when she gets to mentor younger members of her dance company. It’s a chance to share her skills and tips with the next generation of dancers, and being a role model brings her a feeling of pride.

“[My proudest moment] was probably being in charge of a show [and] seeing the little kids looking up to me and wanting to be like me,” Davis said. “They all know my name, even though I don’t know them. It just makes me so happy that they look up to me so much and that I am an inspiration to them.”

Rachiele says that she hopes that she can teach dance to others in the future because she’s been so inspired by her own dance instructors and overall dancing experience. She feels that dance provides an  important artistic outlet for young students.

“I’m pretty sure that I want to be a dance teacher because I feel like everyone should do at least one dance class in their life,” Rachiele said.