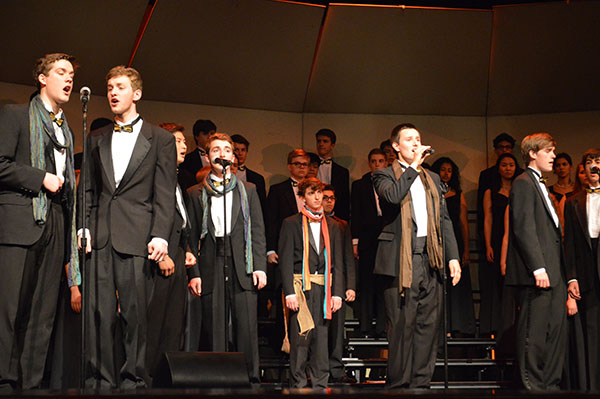 Acapella is rising in the media through pop culture, even appearing in movies such as Pitch Perfect. Although GBS isn’t the star of a movie, it has its very own “ACA-mazing” acapella teams: male group Nine and female group Solace. The two groups are facing the end to an eventful year.

Solace had a great experience together this year, according to senior Ellie Britton.

“Everyone has your back and nobody’s judging the way you sound,” Britton said. “It’s just a really nice stress reliever[…] we all get along really well.”

According to music director, Martin Sirvatka, the girls had exceptional talent and chemistry. Sirvatka believes that they created some memorable moments.

“I think the V-show had a great moment for [Solace] and sometimes just the smaller things like singing at OLPH for the Women’s Club,” Sirvatka said.

Out of many performances, V-show is considered Solace’s most significant stage, according to Britton.

“I remember the last performance of it on the Saturday night show was really sentimental and fun for all of us,” Britton said. “[The performance] was really bittersweet and sad because it was over, but it was happy and exciting because we had a really good run.”

Solace also cherishes the smaller stages they performed on, according to Britton. Solace and Nine sang at Our Lady of Perpetual Help School for a Women’s Club this past February.

“We don’t get a lot of gigs outside of school, so it was really cool to be able to have like an outreach kind of event and be able to perform for [the women] in the morning […] They really enjoyed it,” Britton said.

According to senior Johnny O’Gara, Nine also appreciates their small-scale performances. This past month, Nine, Solace, and Scat That! visited Glenview middle schools to promote choir at South.

“[The reaction] was pretty positive, I think,” O’Gara said. “So far, we have more guys signed up than girls, but we’re hoping to get more people in general.”

O’Gara believes that V-show also left a strong impression on Nine, and remains one of their most important performance.

“During variety show, there was one night where [Nine] had to do stage lights so we stayed until about 11 or 11:30 at night lighting our variety show number,” O’Gara said. “It was just fun hanging out with the guys on stage practicing our song.”

The boys also help each other out with their voices, such as serenading for birthdays and asking people to prom, according to Sirvatka.

“All the group got in cars after the rehearsals…then they drove over to one of the girls house and Brad Kirby asked Kate Maki to prom,”  Sirvatka said.

Solace and Nine collaborated together with projects such as the Pentatonix remix of Carol of the Bells at the Holiday Assembly, according to junior Chuck Quinn.

“Usually the guys might be singing one part of the song and the girls will come in for another […] but with Carol of the Bells, we were all singing the same song so that was a lot of fun,” Quinn said.

Sophomore Tiffany Fujiwara believes that Jamnesty was also an enjoyable performance for the two groups.

“[Jamnesty] was a really low-key performance with no pressure at all and so that was really fun,” Fujiwara said. “It was a goofy like fun thing to do.”

According to Sirvatka, the groups are also preparing for a project by Northwestern professor, Dr. Steven Demorest, that includes each group choosing a song and arranging it without help from a teacher. Senior Lydia Lutz believes that although it is a new experience, there is a good pay-off.

“It’s challenging,” Lutz said. “The getting through it is harder that I thought it would be because we’re just not as efficient […] It’s fun too because it does push you to be more independent and it’s nice to make our own decisions.”

The two groups are also preparing for their end-of the year concerts: Nine after Dark and Solace at Sunset, according to O’Gara.

“I’m definitely looking forward to it,” O’Gara said. “It’s what we’ve been working on all year so each [person] gets a solo song […] it’s really our last chance to sing at GBS.”

According to Fujiwara, she believes that the concerts will be a great way to wrap up the year.

“It’s definitely going to be nostalgic because people are leaving and were getting new members,” Fujiwara said. “It’s been an amazing experience to be able to perform with [Solace].”