Scat That reflects on events and memories of past year 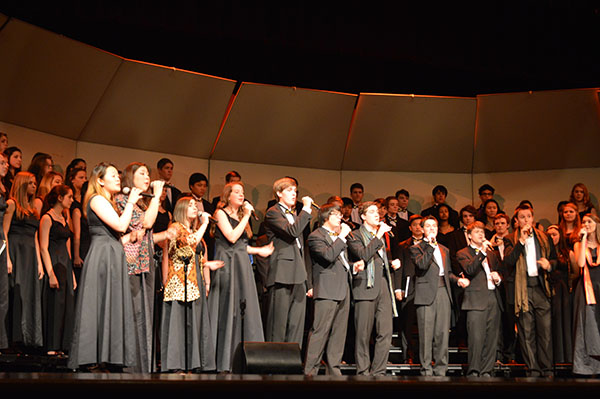 Shoo-bop-shoo-bop-shoo-bop. Scatting is a musical skill which requires rhythm and harmony that Scat That, South’s vocal jazz group possesses. However, as the year comes to a close after much learning and rehearsing with Choir Director Andrew Toniolo, Scat That must come to an end until next year.

One member of Scat That is junior Claire Demorest, who joined the group at the beginning of the year.

“[Ending the year] is going to be sad,” Demorest said. “I feel like we’re a pretty close group because we’ve been in other groups, and we have bonded outside of it, then Scat That brings us all together.”

Although some members of the group are saddened by the closing of the year, other members are taking this time as a learning experience and are making the most out of their remaining time. Another member of the group, junior Christina Kim, shares how she feels about ending the year.

“[Scat That] has definitely been a journey,” Kim stated. “I’m glad I got so much more accustomed to the group, and I’ve become more familiar with jazz music.”

This year, Toniolo was able to expose Scat That to more jazz music through different choral events such as This n’ That and the North Shore Jazz Festival. Kim believes that every performance has its own special moment that makes the whole experience a lot of fun.

“[My favorite performance was] the V- Show because it’s so fun and you put a lot of time into it and you get to stand on a big stage and do your thing,” Kim said.

According to Toniolo, he will never forget Scat That’s first performance together during This n’ That. Ending his first year with GBS, he states that he loves the experience and the students. After taking over the responsibilities of Stevie Marks, former Scat That Director, he was able to have a lot of fun and is happy with leading the group.

Although Scat That is coming to an end, Toniolo believes that he has made the most out of the year for the students and himself.

“I was allowed to spend more time focusing on the group,” he said. “We’re doing a little bit more songs than we did last year and do more performances…so we’re becoming a little more busy.”

Before ending the year, Scat That’s final performance was Jazz Night. According to Toniolo, Jazz Night was in the Lyceum, with South’s jazz ensembles and Scat That being the entertainment. Prior to the event, Demorest expressed her anticipation for the occasion.

“I think Jazz Night will probably be my favorite out of all [the events],” Demorest said.