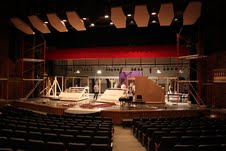 On the esteemed Broadway.com, right next to articles about Wicked and Newsies is an article highlighting the Glenbrook 2012 musical The Phantom of the Opera. Phantom recently received the “Wait, this isn’t broadway?!” award from Broadway.com.

The Glenbrook musical was the only public school musical to be recognized on Broadway.com, and according to Lindsay Champion, the author of the article, the award was well deserved.

“I thought it would be fun to highlight a few outstanding high school productions, and I was especially impressed by the Glenbrooks’ production of Phantom because of the incredible caliber of the two leads, and of course the sets were absolutely stunning,” Champion said. “Huge props to both schools for collaborating together on such an exciting, first-rate performance.”

This recognition on such a significant scale just reminded her of the power of the internet and what it can do for the Glenbrook musicals according to North’s stage director Julian Robinson .

“It’s humbling and exciting that we’re put on the map on a larger scale,” Robinson said. “It just reminds me that that ripple will keep rippling through the internet, and in a lot of ways that production will never die.”

According to South graduate Katherine Loiselle,  former Phantom lead, she’s very honored that she was specifically mentioned in the article. She also said that how the author chose the awardees is significant.

“[The award] wasn’t just for the school’s performances overall,” Loiselle said. “It was about a four-minute clip on a poor quality camera and because of that it shows how these performers can transcend limitations like that and reach people. We learned how to do that at our school and [receiving the award]is an incredible compliment to the schools.”

Senior Hannah Schiller, former Phantom cast member, commented that this is just another example of how when the  Glenbrooks collaborate the results are “unreal.”

“We got the Grammy a few years back and we’ve gotten recognized a lot outside of that, but still Broadway.com is exciting to get mentioned by because they’re the real deal,” Schiller said.

According to North graduate Nathan Salstone, former Phantom lead, he was also thrilled to be mentioned in the article, especially since he’s a big fan of the website.

“I was surprised and ecstatic when I saw the article on Broadway.com,” Salstone said. “I’m constantly looking at articles, shows and performers from that website so when my name was on it I was in awe, and it was a very big honor for me.”

The article also specifically mentioned the set, which Schiller thought was notable because the stage crew put a lot of effort into it.

“It was just such a complicated show to be a part of, and there were so many technical parts the crew had to do,” Schiller said.“Because most shows you usually just make a set, but when you have a moving chandelier and a bridge that goes up and down and all these crazy light cues, it’s just something to be even more proud of.”

South graduate Michayla Van Treeck, former Phantom stage crew member, said she’s very proud of the recognition of the crew on the website and was happy to hear that they enjoyed the Glenbrooks’ take on the set and costumes.

“The crew did a fantastic job,” Van Treeck said. “It was nice to see that someone did notice that it was very nicely done and that we had worked really hard.”

According to Robinson, it’s exciting to know that people outside of the Glenbrook area are enjoying and recognizing the talent and hard work that the Glenbrooks put into their musicals.

“It’s very flattering to be compared to Broadway in any way,” Robinson said. “It means that we’re getting something right in terms of what people hope to see when they come to our musicals.”