Your guide to Election Day and the days after 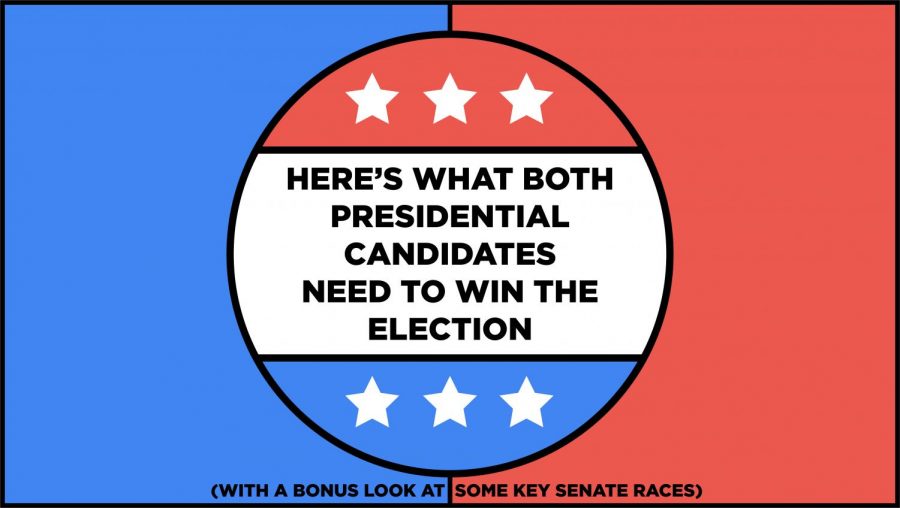 Here we are America: Election Day. After tonight, and the preceding, hellish 18 months, it’ll finally be over.

You see, because of a fun little thing called the coronavirus, it looks like we might have to wait a few days or even weeks after Election Day before the race is called and we know who our next president is. I’m here to help you through tonight and the next few days and look at who’s favored in which swing states, when we’ll know the results and who will win control of the Senate.

So here we go: former Vice President Joe Biden vs. President Donald Trump. The stakes have never been higher.

To start, here’s the 2016 electoral map side by side with this year’s map with the swing states discolored:

As you can see, most of the swing states are states that Trump won in 2016, with the lone exception being Nevada. I’m going to walk you through the swing states by region here, starting with the Midwest, where the 2016 election came down to.

In 2016, Pennsylvania, Michigan and Wisconsin, states that traditionally vote Democrat, went to Trump by less than 1%. Winning those states back is Biden’s clearest path to victory, as those three alone, combined with winning every state Hillary Clinton won in 2016, would be enough for a 278-260 electoral college victory.

However, because of laws in these states that prohibit the counting of mail-in ballots until Election Day, these are also the states that will likely have the longest delays in reporting.

Biden’s polling lead has neared double digits in both Michigan and Wisconsin, but Pennsylvania is still in striking distance for Trump if another 2016-style polling error were to occur. However, Biden’s lead is safe enough in the Keystone State that polls would need to be off by even more than 2016 for him to lose the state; and Michigan and Wisconsin would require polling errors of epic proportions if Trump is going to repeat his victories there. There is a possibility that this election comes down to Pennsylvania, though, which will cause a stressful wait for both parties for the counting of mail-in ballots and during a possible recount if the candidates are within 0.5% of each other.

As for Ohio and Iowa, they’re borderline tossups, with Biden being slightly favored in Ohio and Trump being slightly favored in Iowa. Losing Ohio would be a death sentence for Trump. One thing to be careful of: because in-person counts, which will likely favor Republicans this year, will be released first in Ohio, the early results will likely look better for Trump. Biden will make it closer as mail-in ballots, which favor Democrats, are released.

Grouping all of these states in one category feels a little dishonest as they’re very different states, both politically and demographically. However, Trump won all of these states except Nevada in 2016 (which will likely stay Democrat in 2020), and all of them are in danger of flipping towards Biden.

First off, the elephant in the room (no pun intended): Texas. We’ll likely know Texas’ results tonight, and if Biden wins it, the election is over and Biden is the next president of the United States. Traditionally a Republican stronghold, the state is up in the air, though Trump is still slightly favored.

Now to the rest of these states, all of which Biden is favored to win by pollsters and forecasters. As we discussed earlier, though, the polls can be wrong.

Arizona is Biden’s backup plan after Pennsylvania. Arizona law allows for the counting of early and mail-in results as they’re received rather than only on Election Day like in the Midwest, so those results will be released as polls close tonight. Those will generally favor Democrats this year, so early reports will likely be of a Biden lead, but Trump will probably make the margins closer as in-person counts are reported. We’ll likely know most of Arizona’s results tonight or tomorrow morning.

North Carolina is similar where we’ll likely know a winner tonight, and the winner of that race will be a harbinger of either a Biden blowout or a nailbiter coming down to Pennsylvania or Florida.

Then there’s Florida and Georgia. Georgia is slightly favored to Biden but could really go either way, while Biden has held a consistent polling lead in Florida for most of the cycle.

However, Florida is known for always being close, and this year should be no different. We’ll likely know results for both Florida and Georgia by tomorrow, but early Florida results will likely look better for Biden than for Trump because mail-in ballots are released first.

I’m going to try to make this quick, because I’ve already thrown a lot of information at you. This most recent Senate was held by the Republicans 53-47, and Democrats will likely lose one of those 47 as Alabama Senator Doug Jones is in trouble in his re-election campaign against Republican Tommy Tuberville. Other than that, though, most close races are seats Democrats are looking to flip and they’ll need four wins and the vice-presidency or five outright wins to take the Senate.

Here’s a rapid-fire look at some key races based on polling data and statistical analysis from election forecasting organizations like 538, The Economist and the Cook Political Report. I loosely ordered them by likelihood of a Democratic victory to show which seats will be most impactful in determining control of the Senate.

Phew. That was a lot, but thanks for sticking with me.

So the stage is set. Joe Biden and Donald Trump.

Now you know what to be watching for tonight and over the rest of this week as results are reported around the country. If you’re anything like me, you won’t be sleeping much tonight, so let’s try to stay as calm as possible while we watch our preferred news networks trying to fill time while results are being reported.