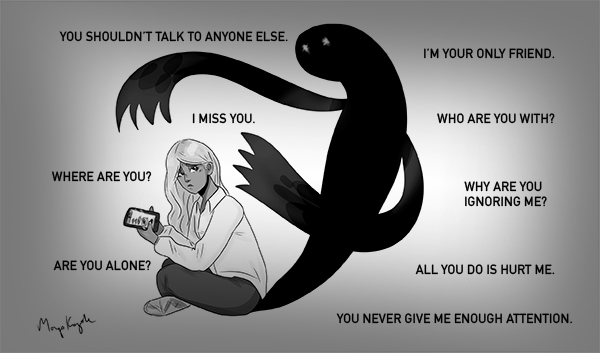 Usually, when people ask if I could go back and change anything about high school, I find myself running through every single option—clubs I could have joined, classes I could have taken, habits I could have avoided—except for what I would change about the people I spent time with.  The bulk of  your high school experience revolves around your friends, enemies, and how you interact with those people, and now that it’s almost over I can’t help but think about if I’d have done anything different, especially when it comes to those who fall in between—toxic friends.

We’ve all heard the New Year’s resolutions to “cut those people out!”, but anyone who’s been in a less-than-ideal friendship (a.k.a. everyone) knows that those resolutions lose their luster by Jan 2 because, to put it frankly, any person with a semblance of empathy struggles to confront toxic friends, let alone break off their friendships completely.

I’ve had a few friendships I would call toxic looking back at them, and they seem to fall into three different categories.  Keep in mind these aren’t the only three possible ways a friend can be toxic—don’t read this and think, ‘Hey, Becky’s not really like that; our relationship can’t be all that bad.’ In fact, the more you find yourself saying a friend of yours can’t be all that bad, the more it’s likely that they are, undoubtedly, all that bad.  But I digress.

First: the friend who never fails to put their own interests before yours.  It’s hard to notice a pattern at first, especially with those who you’ve known for awhile, but it soon becomes extremely clear that this person doesn’t really mean it when they say sorry—and they have to say sorry often.  Friendships like this were always tough for me to handle, especially given my doormat-esque tendencies, and most often ended when the other person stepped a little too far over the line.  It was never hard for me to actually end these friendships, given that I would wait for the issues to progress until anyone would call me absolutely insane for maintaining that bond. Talk about a cop-out.

Second is the most harmful, and that’s the manipulative friend.  While there are a multitude of types of emotional manipulation in friendships, mine came in the form of clinginess; always asking where I was, why I wasn’t with them, who I was hanging out with, and (here’s the kicker): why I was such a terrible friend.  ‘Friends’ like this feed off of tearing you down. I finally grew a pair and ended this relationship when, again, it became too much to tolerate.  The process was one of the hardest things I’ve ever done—toxicity cannot be conflated with a lack of emotional connection as it’s often the exact opposite, which is why people who tell you to Cut! Them! Out! are always full of it.

The third is the hardest: people who have changed in the course of your friendship.  They haven’t wronged you, they haven’t hurt you, and they’re still a great friend by definition, but they’ve become a different person, and that person may not be someone you enjoy spending time with anymore.  Unlike in other situations, this friend can’t be confronted, unless for some reason you enjoy telling close friends that you simply don’t like who they’ve become.  Need advice in this situation? Don’t ask me, I still have no idea how to handle it.

I won’t go into detail regarding how I ended (or failed to end) these friendships besides telling you that I cried a lot, and that I’m better for it.  I’m not jaded or void of emotional connection from my experiences.  I don’t let less people in, or put walls up.  I have hopes that they’ve made me a better friend, to both others and myself, as well as a renowned sense of what I deserve and what doesn’t fly. Being toxic for someone also doesn’t necessarily define you as a person—I’ve definitely been a less-than-ideal friend to some—but rather just means that you don’t mesh.  It becomes hard in facing the emotional connections you’ve already made before this realization.

Sometimes I wonder what I would do if Jesus Christ himself appeared before me and asked me if I wanted to do it all over again.  While I still have some thinking to do regarding freshman-year Cross Country and my failure to ever attend Gardening Club, I’ve come to the conclusion that, toxic or not, I’ve done pretty alright friend-wise.