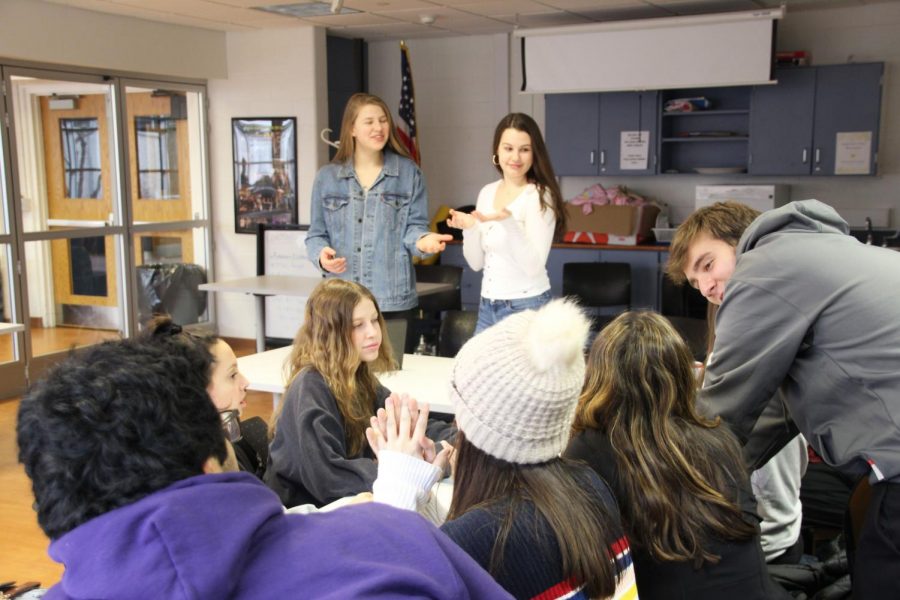 Collaborative council: Standing in front of members of South’s student council, (left to right) Kate Gregory, executive board president, and Executive Secretary Stephanie Ornduff lead a meeting in the SAO. This year, a series of six new changes to student council elections were approved and will be enforced this voting election. Photo by Quinn Toomey

The first change restructures Student Council positions. The revised Student Council will feature a president and three vice presidents as opposed to the current system of president, vice president, secretary and treasurer, according to Koo. The reasoning behind the change was the inconsistency between the names of positions and their actual responsibilities, such as how treasurers do not handle money, Koo says.

“It was almost as if we had these titles, but they weren’t doing what they were supposed to be doing in those job descriptions,” Koo said.

The second and third changes involved eligibility for Executive Board positions. To be placed on the Executive Board ballot one is required to have attended an interview with Koo and the student body president, also previously being a part of Student Council for a year, according to Koo. He also says that the interview is not a basis to be rejected from being on the ballot as long as the candidate attends the interview.

“It’s not so much based on the interview that you’ll be accepted or denied, it’s more of an opportunity for a candidate to sit down and let us know what they really want for the school,” Koo said. “It’s not a screening or a weed-out, it’s more of a [chance] get to know the candidate.”

The fourth and fifth proposals involve restructuring the ballot, better equipping the ballot for the system of three vice presidents, as well as keeping voting for Executive Board open for 24 hours. This was, according to Koo, to allow those with busier schedules to still vote. Previously the ballot was only open from blocks one through three.

The interview proved to be a more controversial aspect of the changes among the Student Council, especially due to the original plan that the interview would occur on a Saturday, according to Kate Brennan, senior class treasurer. Brennan understands the need for the interview, but expresses concern for students that do not have the resources to get to school on a Saturday and would have to discuss their family situation.

In response, Koo says that if the candidate does not have the means to get to school on a Saturday, they can talk to him to find another time to conduct the interview.

Koo says that his role in bringing these changes about was fairly minimal, stating that he was not present for official Student Council meetings at times. According to Kate Gregory, executive board president, Koo was not present during the voting process.

Koo said, “My job was to facilitate meetings and timetable, but in terms of how they presented these things and talked about them and voted on, I wasn’t even there. We made it very intentional of me not being at those meetings…I was more the outside official.”

Brennan said, “This decision was voted on by Student Council when it comes down to it…but at the end of the day, everybody had the voice to speak up, say their opinions, and we all did vote on it,” Brennan said. “But I do feel like [Koo] played a very large role in creating these new policies.”

The proposals were written primarily by the juniors with the Executive Board providing revisions Gregory says. Still, she thinks that the changes will be good in the long run for Student Council.

“I think the changes have the potential to create good change and a lot of the changes reflect what we’ve already been doing or things to alter [Student Council] slightly to make Student Council run smoother in general,” Gregory said.