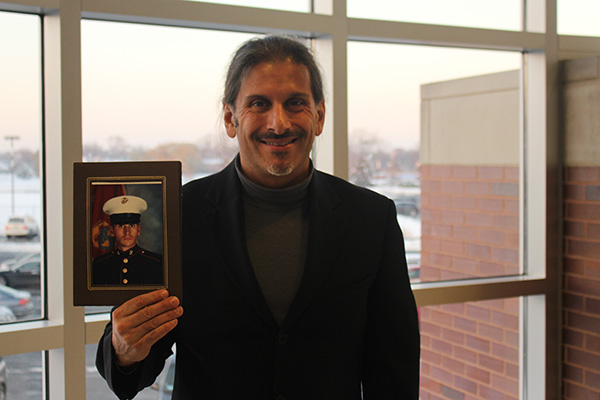 Military time: Displaying his potrait as a former member of the U.S. Marine Corps, Brian Shaoul, Transitional Studies Instructor for Student Services, described that he never saw actual combat. His main role in service was maintaining aircrafts that would fly troops into loading zones.

For many students, the halls of South are populated with unfamiliar faces. Familiar or not, untold stories remain behind them. Such is the case for many staff members at South who have served in the military but do not necessarily divulge their stories.  While these members of the South community may not have served on the front lines, their efforts were still concentrated on protecting the country.

One such person is science teacher James Glynn, who volunteered for the United States Army Reserve for a six year period from 1988 to 1994. According to Glynn, he felt volunteering was the right thing to do at that point in his life following college. He was assigned to a special forces unit that used morse code to relay messages from units in Central America during the Gulf War; his job, however, was not to decrypt the messages he delivered.

“We would be in our reserve base in Chicago and we would be talking to someone deployed in Central America,” Glynn said. “They sent us messages, a lot of which were encrypted, so I wouldn’t know what they meant, and we would relay the messages to someone else.”

According to Glynn, he was fortunate enough not to have been deployed. However, he considers his time in the military to have been a lot less glamorous than people expect.

“It was a lot of sitting around waiting for nothing to happen,” Glynn said. “[The] Gulf War was going on, which was stressful for a few months. The Soviet Union still existed, it was the Cold War, so you’re basically sitting around eating doughnuts during the day and drinking beer at night waiting for World War III to start.”

According to Brian Shaoul, Transitional Studies Instructor for Student Services, from 1989 to 1994, he served in the U.S. Marine Corps as an electronics technician for aircrafts, but never saw combat. He was deployed on a ship to the Mediterranean Sea for much of that time, maintaining helicopters that would fly troops into landing zones.

“The closest I came to combat was in the Adriatic Sea when Yugoslavia was breaking up and we sent troops in there,” Shaoul said. “But my role in maintaining the aircraft was a very secondary combative role. I was aboard the ship when there was activity going on. I guess I was never really in any imminent danger, so I was very fortunate.”

According to Shaoul, he is lucky to have had a positive experience in the military despite many soldiers having negative ones. He is grateful for his time spent traveling the world and his exposure to the realities of life at a young age.

“[The military] really shaped the person I am now,” Shaoul explained. “I really deal with stressful situations a lot better than I would have had I not had those experiences. I think it made me more of a well-rounded person and appreciate a lot of things that we often take for granted.”

One of South’s many paraprofessionals, Delbert “Buzz” Mette served in the Army for several years during the early 1970s as a young college student. According to Mette, he is thankful for not being deployed to Vietnam despite half of his training unit being sent there for the war.

“I was drafted in 1970, and a lot of guys I was in with went to Vietnam, but I lucked out and they sent me to Alaska,” Mette said. “I have always said as a joke that I was protecting the lower 48 states from the Russians that might come through the Bering Strait.”

According to Mette, he served as a mail clerk at Fort Richardson in Anchorage, Alaska, which he considered to be a relaxed job. He didn’t want to go serve upon being drafted but felt obligated to serve due to his civic duty to his country.

“I was 19 at the time, and it was a good experience for me,” Mette explained. “I was young and didn’t have a whole lot of direction in my life, so it gave me a good outlook on life. There’s a lot of regimentation in the service; it straightens you out if you’re a little wild.”

According to Mette, despite not wanting to serve when he was drafted, he now views the experience as a positive one. He regards it as an illuminating time, and helped him become a mature young adult.

“I was proud to serve for our country,” Mette said. “That is the price we pay to live in the best country in the world, sometimes even making the biggest sacrifice possible. Unfortunately, freedom is not free.”