Fockey finishes their season at state 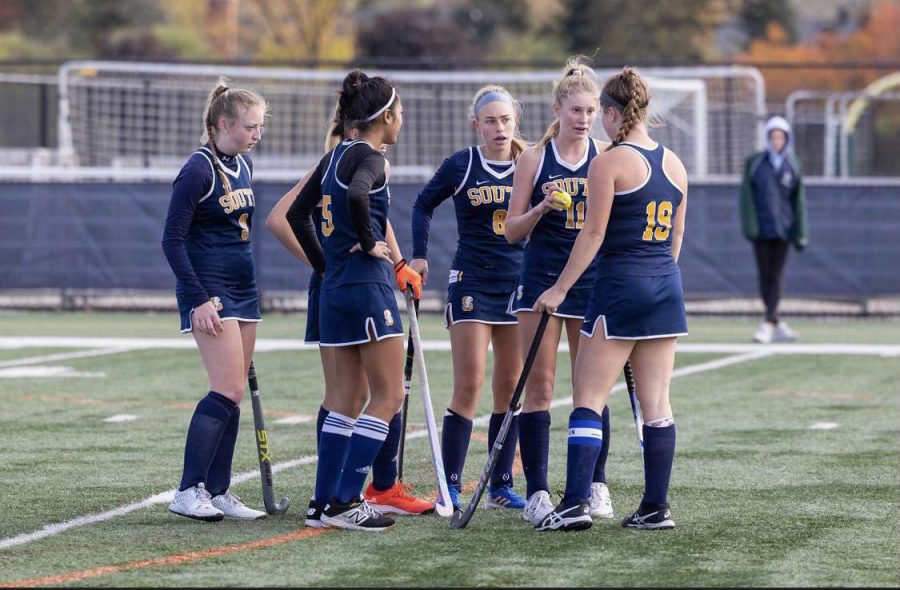 As rain washed over the turf of New Trier West’s field, girls in field hockey uniforms collided in the cold air. Ponytails were drenched in not just sweat as the scoreboard slowly ticked down during the fourth quarter. As the opposing team made their final shot, the buzzer rang, ending the field hockey team’s season.

Kicking off each game with their signature handshake since freshman year, senior twins Sanne and Eva Van der Goes led the girls’ varsity field hockey team to an almost perfect 16-3 regular season record, placing them as the 2nd seed in playoffs through the Illinois High School Field Hockey Association, according to Eva.

Carrying the team to victory, Head Coach Tom Rosenbaum explained that a key component to the team’s strong season has been the returning athletes have led a clear vision of their game play. He said the team’s collaboration on the field challenged the rookies to revamp their skills.

“We have a couple of players on our team that have been playing for a while,” Rosenbaum said. “Understand the game [and] their field hockey IQ is very high. Understand how to play the game, and rather than playing down to the level of other people, they’re bringing the people from their team up to their level and their field hockey IQ.”

The success this year has also been enhanced by the team’s chemistry and friendship both on and off the field, Eva said. She expressed that a key difference between this year and past years is the way the players have come together to become an unstoppable team with their close connections off the field.

“Compared to my other years, this has been the year that our team friendship and the way we collaborate as teammates has been the strongest,” Eva said. “Being friends off the field [and] being teammates on the field has really helped us be successful in our season.”

Sanne explained that the team’s dynamic has also improved with the addition of more players stepping up, and one key player in particular, junior Maya Shah, is one of the players who has improved immensely over the past two seasons.

“[Shah] has only been playing for two years, and for someone who has played for such a short amount of time she’s able to play at such a high level, which is really impressive.” Sanne said.

Shah came into her third season with the intent to better her ability with the stick. She added that practicing skills through drills and experience on the field played a significant role in that process. She also wanted to strengthen her relationship with the team through events and bonding exercises.

“I would say my stick skills have improved,” Shah said. “I would say getting reps in is key. I [also] wanted to become close with my teammates and have lots of team bonding movements which we definitely accomplished this season.”

Losing twice to Lake Forest High School, who at the time, left the team disappointed. While they wished the games resulted with different outcomes, Rosenbaum reminded his players it is a learning experience to compete against other teams.

“You have to stay focused and stay under composure,” Rosenbaum said. “We didn’t have that the first time we played them, so whereas now if we play them again we will be that way.”