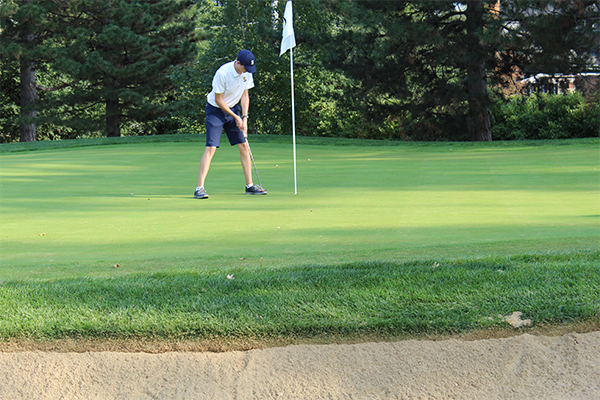 Putting Professional: Working on his putting game, senior Captain Sam Collett is trying to keep his team close despite the chaos of the season during a pandemic.

Despite a dissatisfactory start to the season, South’s boys’ golf team is hoping to make the most of a season they were unsure would even happen. Senior Captain Mac McGurn believes that the component that will help the boys hit their stride and find a rhythm during the bulk of their schedule will be their strong team bonds paired with hard work.

“I don’t really know how to describe it, but me and [senior] Sam Snively play better together just because we have been friends since middle school,” McGurn said. “We get along really well and are positive influences on each other on the course.”

Zimmermann also echoed the importance of these relationships that McGurn mentioned. Because of their team bonds, Zimmermann says that the team doesn’t have to worry about falling apart because of the coronavirus protocols.

“Sometimes, if you don’t have good chemistry with your teammates, you might not play as well,” Zimmermann said. “Luckily though, all our guys are great guys so it is not an issue at all.”

Head Coach Jeff Paek explained that the idea of this close-knit team is highlighted through their unusual three captain structure. He realized it was a no-brainer to have three because  McGurn, senior Sam Collett and sophomore Chase Blanchard have all been playing fantastic golf and easily stood out as captains for the team. He also noted that this is the first year ever the team has elected three different captains, but he says it’s for an excellent reason.

“A lot of it is due to the extra coordination and leadership that was going to be necessary with everything that is going on this year,” Paek said. “But [McGurn, Collett and Blanchard] have been our most consistent scorers so it has ended up being a really good dynamic for this particularly unusual year.”

As of right now, Paek said that the IHSA has placed the regional tournament as the team’s final event of the year, despite the unknowns at this point about when exactly they will be allowed to play until. McGurn said that the players are keeping a positive and focused mindset regardless of the constantly shifting environment.

“I want to see my team succeed whether it is [at the state tournament] or not,” McGurn said. “But mainly, senior year has been a lot about simply having fun.”

Still, Paek says the boys have a lot to be grateful for and that they are looking forward to playing their best team golf as they near the latter half of their season.

“I think that we can appreciate this season more because up to two weeks before its start, we were unsure if there was even going to be a season,” said Paek. “The bulk of our season is still yet to be written and our goal and our hope is that we get more consistent as we progress.”