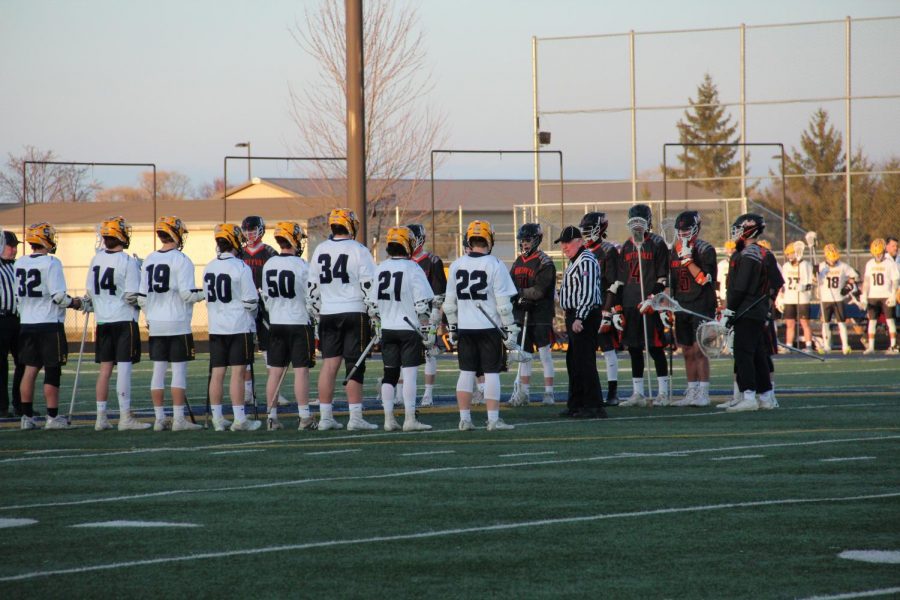 Lining up at center field, the boys' lacrosse team stands together at the start of a game in the 2019 season.

Matthew Larsen, varsity boys’ lacrosse coach, said that his excitement for this season was like no other. Larsen was ready to take the field until the Illinois High School Association (IHSA) announced that high school sports were cancelled for the 2020 spring season.

Although he was prepared for the worst, Larsen felt upset after hearing this news from the IHSA, and he was most disappointed for his players. Many of the seniors couldn’t wait for their last season together, and having an amazing team was something everyone was excited about, he explained.

“I was looking forward to having one of the strongest teams since the 2000 state championship team,” Larsen said. “Having 17 seniors and all of them being extremely talented does not happen often.”

After the Board of Education disbanded school, the IHSA felt it was the right thing to cancel state tournaments for spring sports. Craig Anderson, IHSA Executive Director, said in a letter to Illinois high schools that he believed that Governor Pritzker and the Board of Education made the appropriate call in issuing an order closing all Illinois schools and that the IHSA planned to follow their lead.

“We simply felt we could not conduct state tournaments that meet the expectations of our member schools this spring,” Anderson said. “As disappointing as it may be for students, it is the right decision for their health and safety.”

Aidan Prikos, senior varsity lacrosse player, was looking forward to his last season at South. After school was affected by Covid-19, Prikos had a feeling that lacrosse would be cancelled due to the pandemic, but it was still a disappointment to him after his thoughts became real. Prikos knew that he would never be able to regain his final season, and felt robbed of what were supposed to be his last moments at South. However, this isn’t the end for Prikos’s athletic career, as he will play football at Illinois Wesleyan University next year.

“I felt that it was coming, but it still sucked that we lost a season we can never get back,” Prikos said. “I was looking forward to playing GBN this year and enjoying practices with my teammates and friends.”

Katie Weiss, senior varsity soccer player, was also devastated by the cancellation as it took away her last chance to play high school soccer. Weiss has been anticipating being a varsity captain and getting her senior night for as long as she can remember.

“Although I made the decision to not play in college, I craved for so long to have a senior night,” Weiss said. “This season I was looking forward to playing my last year with my best friends, winning tournaments, and ultimately going to state. Knowing that I might not put on my #24 jersey again makes me so upset. I played soccer ever since I can remember and I now realize how that sport has shaped me into the person I am today.”