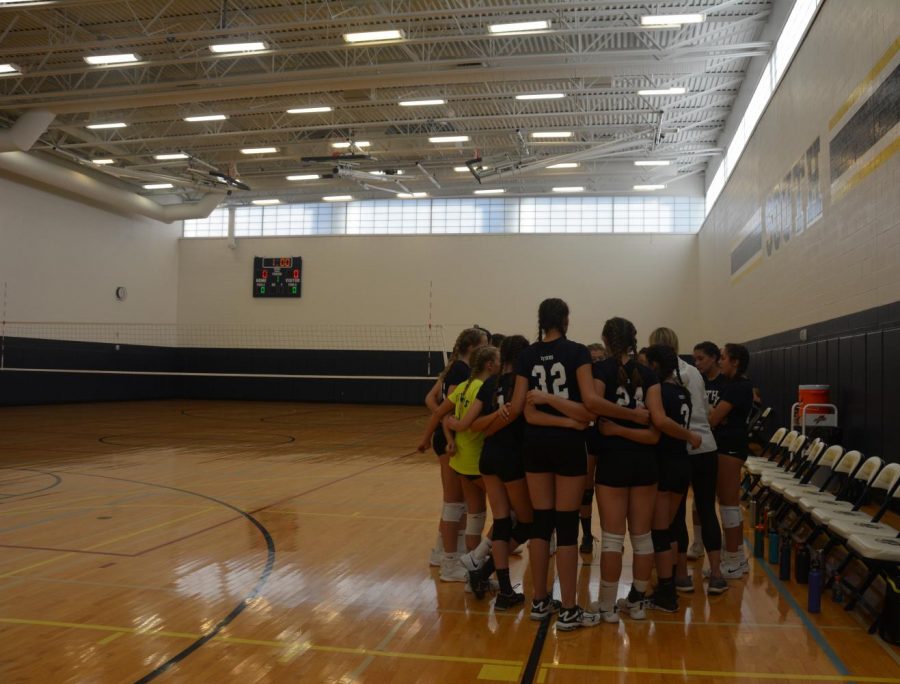 Fearless Freshmen: Standing together in unity, the freshman girls volleyball team huddles together to discuss their practice. Being a part of a team creates a sense of belonging as they start off the year at South, according to freshmen Teighan Harris.

Starting high school can be a very overwhelming experience, but according to freshman Emily Shim, being well into a sports season before school starts can make the transition much easier.

Shim began her cross country season two weeks prior to school’s start and explained that it helped her get an idea of what South was going to be like before school started. She explained that this calmed her nerves and gave her something to be excited for as the year began.

“Since it was before school, it kind of helped me get used to what high school was going to be [like],” Shim said.

Junior golfer Joey Zimmermann agrees with Shim that summer practices are beneficial. He pointed out that even though the August start seems early, it is helpful because you can focus on your sport before school adds to the busy season.

“Starting [practices] before the school year starts is good because it allows you to make the adjustment into season,” Zimmerman said.

Zimmermann knows that as a freshman, the new homework load and sports schedule may be overwhelming, but it taught him valuable life lessons. He says that the lack of time you may have to get everything done can be beneficial in the long run.

“It really teaches you to manage your time,” Zimmermann said. “It really drove discipline to make sure I’m on top of everything.”

These practices provide a place for the players to relax from all the pressure that school brings, according to the athletes. Along with that, both Zimmermann and Shim met people who quickly became their friends.

“It introduced me to new people and friends that I have right now,” Zimmermann said. “We have two freshmen on varsity and I think it helped them transition into high school.”

Freshman Teighan Harris has played volleyball since sixth grade and was excited to start playing at South, but was nervous about the schedule. Harris soon learned that instead of volleyball adding to stress, it became an escape.

“It made me less stressed because I knew that after the first day, I’d just go back to doing what I love and everything would be fine,” Harris said.

Shim also looks forward to practicing after school. Initially, she would dread going for a run after a long day at school, but this quickly became the highlight of her day as it was a place to see her friends and practice a sport she loves.

“I was tired, especially after school when I would have long days, but then I transitioned and I got used to it and all my friends are there,” Shim said.

Shim explained that joining cross country was crucial to her high school experience. To Shim, the best part about the sport is her teammates. It is these people that helped her feel comfortable with high school and have her looking forward to an extended day.

“I have to say every single person on the team has helped me transition with all their positivity, their welcomeness, and them just being open to embracing me,” Shim said.