Boys’ volleyball picks up the pace 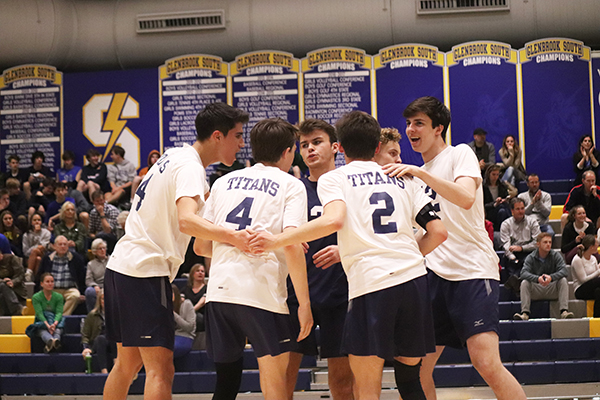 Spectacular Spiking: Congratulating his fellow teammates on another winning point against their competitor New Trier, sophomore Kyle Busiel (far right) can be seen smiling with enthusiasm. Unfortunately, the boys’ volleyball team wasn’t able to win against New Trier on Senior Night ending with a score of 25-18 in the first set and 28-26 in the second.

In the second set of an intense volleyball game against New Trier, senior Jack Shampine hits the ball across the court and over the net. The Trevian libero gets a nice dig, getting the ball back over onto South’s side of the court. Sophomore middle Kyle Busiel strikes the volleyball to the ground, winning the point for the Titans. This was a major turning point, according to senior Thomas Cavallaro, and the varsity boys’ volleyball team went on to win the second and third sets, pulling off a conference game win.

“It was hype,” Cavallaro said. “It was a big turning point in that set for us to win that match.”

With a senior class of eight players, this year’s team is looking to push themselves as far as they can in the playoffs, Cavallaro said. As the host of this year’s regional final, the team hopes they can accomplish a win in that game, senior Jack Shampine says, which will likely be played against Loyola.

“[Our goal is] beating Loyola in regionals [which are May 20 through the 22],” Shampine said. “That’s always been our little rivalry at the end of the season. [I also want to be at] the top of the conference.”

The beginning of the season, however, brought some injuries, with Cavallaro spraining his ankle and dislocating his shoulder, leaving the team without a setter. Senior Will Langas stepped up to play setter and helped to lead the team to multiple wins, according to Head Coach Tim Monahan.

Having a very experienced offense with some strong blocking, according to Cavallaro, the team was well prepared for this season. However, the team’s weakness, Monahan said, is when one of the boys get down, the rest of the team feeds off of that emotion.

A lot of this teams success can be attributed to the strong chemistry the team has, Cavallaro says.

“The team environment is a party,” Cavallaro said. “There are eight seniors and a lot of us have been friends for a long time, and [we play club with] the juniors and sophomores.”

The return of Cavallaro from his ankle and shoulder injuries was a turning point in the season for the Titans, and now the team has been able to pick up the pace and work towards their goals, according to Shampine.

“Ever since [Cavallaro] has been back, we’ve had a different mentality and more of a team bond,” Shampine said.