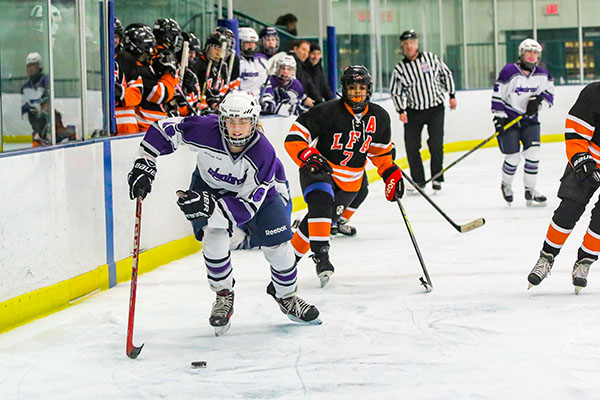 As senior Katerina Poulos skates down the ice, she races to pass to her teammates. The puck glides into the net, and the fans roar with excitement, according to Poulos.

Poulos says the dynamic of the girls’ hockey team is different this year since many key players graduated last season. A lot of the girls have not played together before, so the team started off unsteady, but have been working to gain some wins.

Sophomore Addie Carr says this year is all about development of the players, whether it be stick skills or connections on the ice. She hopes to help the team out as much as possible with her skills this season.

“We hope to do as well as we can throughout the season and work with everyone,” Carr said. “This year, the team gets along better than the last two years I’ve been playing [for the Glenbrook team].”

On Jan. 20, the Glenbrook girls’ hockey team played Evanston and won 4-0, says senior captain Lily Cataldo. She says the team has been improving with practice.

“We have some new freshmen who are good, so hopefully we can work hard to try to get close to [state],” Cataldo said.

Cataldo has been injured for the whole season, which has had an impact on the team on the ice. She hopes to start contributing to the team once she is cleared, she says.

“I have a stress fracture in my back [due to hockey],” Cataldo said. “I should be back in a few weeks, and I hope to get back to where I was, so I can help the team.”

Cataldo says the team plays in the Metro League, made up of 14 teams and divided into two brackets of seven.

This season is different than past seasons in terms of objectives, according to Cataldo. Making it to state might not happen, but they have other achievements they hope to accomplish.

“Since we seeded in the lower division, we could win The Founder’s Cup, which will be a good goal for us,” Cataldo said. “[The Founder’s Cup, the championship for our bracket], will push us but is also realistic.”

As Poulos wraps up her last season of school hockey, she says she wants to be an inspiration for the younger girls on the team. She hopes to encourage more girls to play Glenbrook hockey since it is such a strong team.

“I want to get girls to play, even if they have never played hockey before,” Poulos said. “In my four years, [the team] got two state titles, one 2nd place [championship title] and one 1st place [championship title], so hopefully people are looking to take [the team] more seriously. This year we are not looking at state, [but rather] a developmental team who is getting prepared for future years.”

The girls played on Jan. 27 in support of St. Jude’s Cancer Research Center, according to Carr.  The game took place at the Northbrook Sports Center and donations were taken for admission.