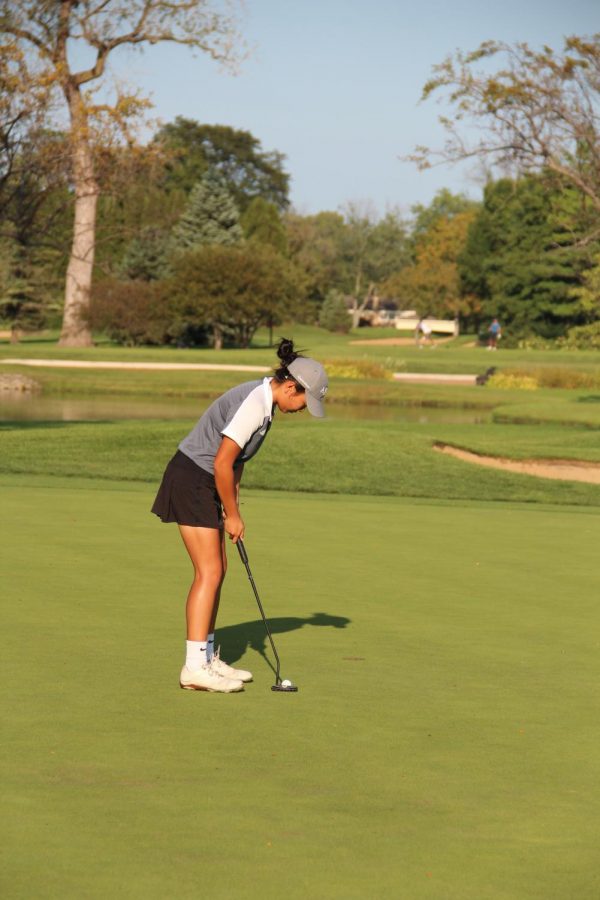 Concentrating on her shot, Tanaka aims to put the ball in the hole. She'll be continuing her golf career as a D1 athlete at Indiana University next fall.

Senior Hanna Tanaka remembers the first time she played golf at the age of ten in the fourth grade. She was with her dad at the Glenview Prairie Club and, although experiencing frustration at first, she continued to work hard in order to improve and adapted to the sport. Tanaka has come a long way from disliking golf, now being a Division 1 athlete committed to Indiana University.

Tanaka says that she has worked to overcome her struggles and can’t wait to play at Indiana next year. She explains that golfing at a higher level has been her dream.

“Going into the eighth grade, golf was the biggest thing on my mind,” Tanaka said. “It has always been a dream, but it slowly became a goal. To have finally committed and to be playing a sport at college is a dream come true.”

Tanaka says how she has worked to improve over the years and has gained more experience at golfing. Her dad kept her going during her struggles, and, because of him, she continued to play.

“I remember I could barely get the ball in the air and the rest of my friends who I played tournaments with were really good,” Tanaka said. “My dad got me a membership at the Glen Club and I used to go there for three hours at a time to improve my game and make sure I could just get the ball up in the air… I told myself if I trusted that process, then good things would happen.”

Head Coach Tom Cieplek explains how Tanaka does a great job getting her team focused prior to matches. He also believes her work ethic is outstanding and compliments her skills, being one of the most well-rounded players he has ever coached.

“[Tanaka’s] work ethic is definitely one of the best I’ve seen,” Cieplek said. “Her distance and her control of her shot is her strength. She can hit a driver further than most I’ve seen.”

Sophomore Olivia DeMattia, a teammate of Tanaka, looks up to her. She explains how she is the team leader and motivates the team to do their best. DeMattia also comments on her game, saying she he is a wonderful player.

“[Tanaka] is an incredible driver, [as] she can drive the ball very far and very straight,” DeMattia said. “Her putting is insane, everything about her game is incredible.”

DeMattia says Tanaka is very involved with the team, making them all really close to each other. She also explains an emotional moment when Tanaka had her last putt of her South career.

“On [Tanaka’s] 18th green on her last competitive high-school round, she came off the green crying happy tears because the team was holding up signs for her,” DeMattia said. “You could just see how much she cared about the team and the sport.”

Nhan Tanaka, Hanna’s mom, has also been her number one supporter. She says she has helped her daughter prepare mentally for matches by providing moral support to her, in addition to private lessons and equipment as well. She enjoys to watch Hanna golf and be there on the sidelines supporting her at as many matches as she can.

“We’re very proud of all of [Hanna’s] achievements,” Nhan said. “Whether she continued to play or not, she’s had a terrific run with this sport. The fact that she’s continuing on is very exciting.”