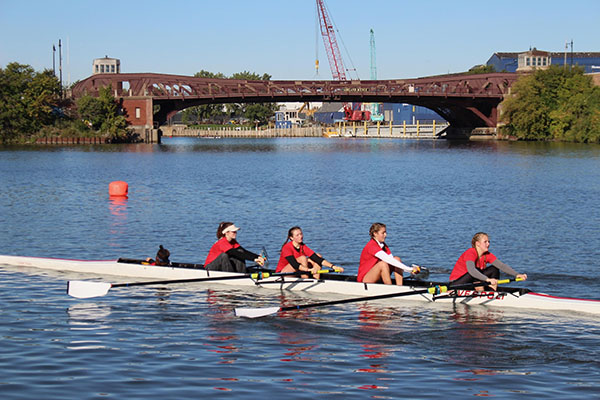 By the time the bell rings at 8:00 am, the girls’ crew team has already had practice out on the water for two hours. Practices take place every morning from 5:30 am to 7:30 am, but according to sophomore Rachel Rochlen, she wouldn’t change it for the world.

The team started last year, when current freshman Meredith Jenny was in eighth grade. Jenny’s passion for rowing grew after she spent her summer rowing at camp. Upon returning, Jenny and her mom, Laura Jenny, decided to create a program at South.

The team has learned from their mistakes last season and has doubled down on committing to the sport, in order to be able to compete with local teams that have been around for several years.

“Last year there was a more chill attitude [and] you could come to practice one to two times a week [whenever you could],” Rochlen said.  “This season we have been more committed. We got really close and it helps us get close on the water. Our performance is a lot better because we are all friends now.”

Girls’  rowing  is not considered an official school sport, according to the Illinois High School Association (IHSA), but is considered a club at South. Although the team cannot be affiliated with the school, they can still use South’s logo. The school will not be involved in scheduling meets and practices, said Josh Koo, assistant activities director.

“The best example [of a club team] is hockey,” Koo said. “From the students perspective, hockey looks a lot like a team, but from the administration’s side, we don’t coordinate practices or games, it’s all led by outside families.”

With nine girls on the team, the girls’ compete with two boats, five girls in one and four in the other. After their first regatta this season, the girls’ crew team ended in last place, but Rochlen sees it as a positive experience over a negative one.

“[The other boat was] cheering us on and it was so much fun,” Rochlen said. “[Although] we came in dead last but it was [still] so fun. Afterwards we hung out and ate food and talked for hours.”

The coxswain, a position in the boat, acts as the GPS for the boat by yelling through a microphone navigating the rest of the team through the water. Rochlen is the coxswain for the team and says it has brought her into a leadership role.

“Sometimes we will be out for 30 minutes and I am talking and yelling to motivate them,” Rochlen said. “Yelling for 30 minutes really changes you and it inspires me [in and out] of school to keep going and not give up. I play my recordings of me during rowing [before regattas] to get in the zone.”

Senior Logan Steenbergen began rowing when she was looking for a sport to do during the fall season.

“I wanted to participate in a sport, so my mom was like ‘why don’t you try rowing?’” Steenbergen said. “She was the one that found the team that I row for and [after] I went to a couple practices I really liked it.”

Steenbergen’s favorite memory from this season is when the  coxswain’s microphone broke during a regatta and they lost communication on where to go. According to Steenbergen, they had to pass messages down the boat in order to navigate the waters.

“I think that we all knew that we had to work together in the boat, and adapt on the fly,” Steenbergen said. “In a sense that forced us to be more unified than usual, and gave us a great story to tell after.”