Girls cross country looks ahead to a season of success 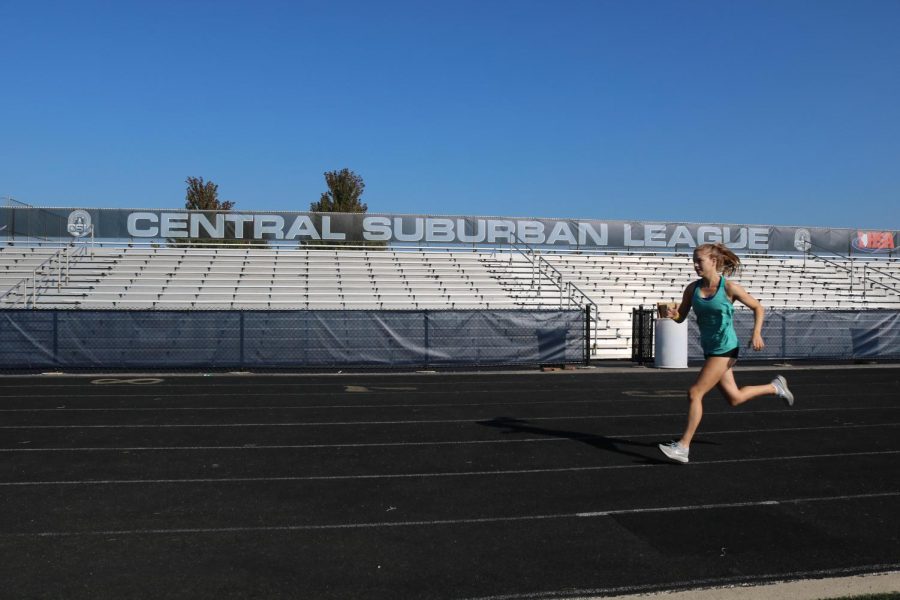 The Girls Varsity Cross Country season started off with a 3rd place win at the Wakanda meet on Sept. 1st. Goals to continue this streak of success is hoped for this season.

When asked about some of the stronger runners on the team, senior captain Catherine Nowak had junior Kate Jortberg in mind.

“I would say our best runner for sure is Kate Jortberg,” said Nowak. “she’s really really fast!”

Not only is Jortberg important to the team according to Nowak, Varsity coach Meaghan Fastert also mentioned Jortberg as one of her important members of the team.

“Kate Jortberg, who placed 20th at State last year is one of our key runners,” said Fastert.

Nowak talked about her role as captain. She also states that jobs between the captains are divided with the other leaders, who are Lila Frick and Claire Williams. According to Nowak, she loves to motivate all the runners on the team and keeps them excited during every meet.

“I’m definitely one of the louder people… I really love to cheer people on and keep people in a positive mindset,” said Nowak. “We all divide up the work to be captains in our own way…  I’m the more vocal one.”

Each runner on the team has their own preparation routine. One runner who has a very set routine is Jortberg. Jortberg talked about her routine the day before and the day of each meet.

“I always eat the same thing the day of and the night before,” said Jortberg. “I have the same routine every time just so I’m warming up in the same way.”

According to Jortberg, consistency within her eating habits is important for her to succeed during meets. Similar to Jortberg, Nowak’s attire seems to be a key factor when preparing for meets.

“I put on my pink compression sleeves for my shins,” said Nowak. “I also put my hair in pigtails with a headband.”

Being a member of the varsity team since her freshman year, Nowak has grown up with Fastert as her coach. According to the runner, she has benefited greatly.

“Fastert is such a good coach… she is always really encouraging and really positive,” said Nowak. “She’s helped me become a more confident person.”

Fastert has helped many runners on the team. Jortberg is another runner who has expressed her positive feelings towards Fastert. She talked about the influences that Fastert has given her.

“She’s always looking for different ways for everyone to improve, not just physically but mentally as well,” said Jortberg. “She helped me a lot to grow as a runner and she still helps me.”

According to both Nowak and Jortberg, Fastert has helped them grow as runners and as people outside of their sport. As the coach, Fastert has different exercises each day, one of which being Friday meditation.

“Fridays are our… guided meditation, where the girls go through each mile and they picture how they actually feel during the race versus how they should act or envision themselves feeling,” said Fastert, “We usually tell them, ‘okay, you are calm, you are ready.’ We use that verbiage to get them in that mindset”.

Finally, both Nowak and Jortberg talked about their goals for this season. According to Jortberg, she wants to run in All-State and “would love to improve on [her] finish there.”

According to Nowak, although she wants to improve her time as well, she also hopes for a stronger bond with the seniors on the team. She also acknowledges what her and the rest of the team have already done to create a “family-like” bond.

“I.. want to break 21 minutes, but I also want the seniors to get closer… we made t-shirts together for the sports assembly.”

Fastert also talks about what she really cares about as a whole.