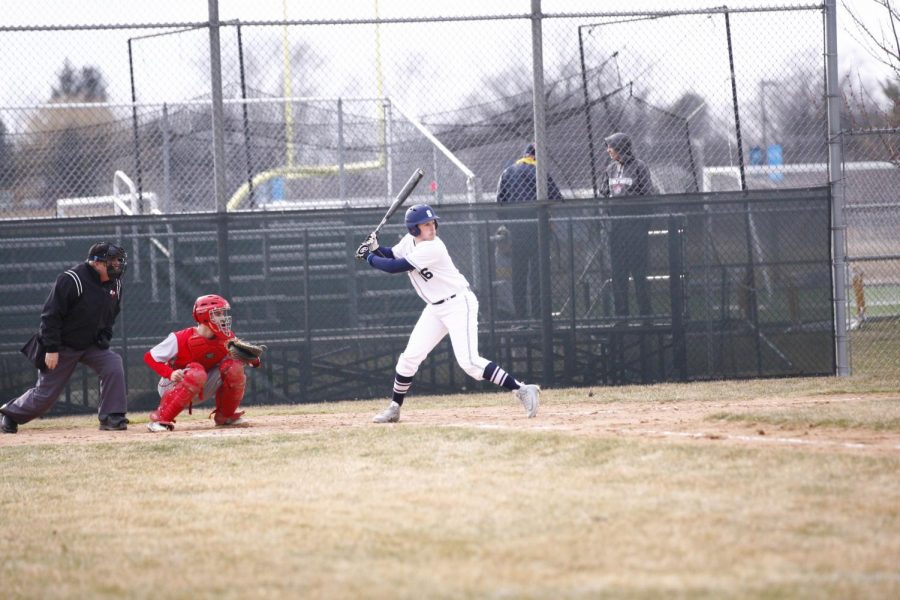 HITTIN’ DINGERS: Eyeing the pitch, senior Jacob Newman looks to connect with the ball against Deerfield. The Titans fell to the Warriors 15 to 4.

Enduring the weekly morning practices within the fieldhouse for two months the men’s baseball team has completed their preseason. Theteam has four victories under their belt, and credits the pre-season for their early season success, according to senior second baseman Mike Snow.

Throughout the early season, the team has prioritized conditioning and being physically prepared for the season, according to Snow. Snow states this will help the team get in the right mindset as the conference season approaches.

“A slogan we like to say and [have been using] for the past couple years is ‘We might not be the best team, but we’re going to be the most conditioned team,’” Snow said. “So [the] pre-season has helped a lot to get in the mindset, [be ready to] play in any condition and to give it our all.”

The most difficult part of practicing indoors for a long time is keeping the team’s motivation up, according to Head Coach Steve Stanicek, explains that there is nothing that can be done to help the situation, and the team must accept that indoor practice is simply a part of the season.

“It’s not so much the motivation about playing and competing, it’s keeping them motivated when you’re inside and you want to be outside,” Stanicek said. “That has to come from [the team], staying focused and understanding that this is just part of the process of playing baseball in the Chicago area.”

Now, with the regular season underway, the boys are adjusting to the regular season. According to senior pitcher and first baseman Jacob Newman., in their first game against Stevenson on March 19, they lost 7 to 2. Newman explains that the loss did not cause too much stress.

“Our first game didn’t go too well, but I don’t think any of us were too worried about it,” Newman said. “It wasn’t an ideal game. It was cold and it was our first game outside so there was going to be some rust. But there’s definitely a lot of potential on this team, so once we get to our peak performance there’s no doubt that we’re going to be pretty strong.”

Stanicek explains that the first ten games are geared towards figuring out the lineup as well as rotating players to see what is the best fit.

“We want everyone to get a lot of playing time, play a lot of different fields, and spend some time together and get to know everybody. The Nashville trip] is really our spring training, so to speak,” Stanicek said. “Usually the first ten games of the year involves a lot of evaluation, [asking ourselves] ‘if we have the right lineup,’ because a lot of the time we as a coaching staff may be making mistakes.”

The Titans return seven players from last year. Newman states that the team’s experience will play to their advantage.

“I think [having a senior heavy team is] great,” Newman said. “A lot of guys played last year on the team which shows that we have a lot of experience. It [also] plays into our favor when we play against younger teams because we know the lay of the land in a sense for varsity baseball, so it’s definitely good.”

Due to the number of seniors, the coaching staff felt that everyone should  demonstrate responsibility to the team, according to senior catcher Conor Nash.

“[Stanicek said] at the beginning of the season that there were no set captains,” Nash said. “He wanted everyone on our team to have equal leadership roles, so we don’t have any set captains. [Instead] every senior or junior has their own responsibilities in leading their position groups, whether it’s leading during a game or every pitch.”