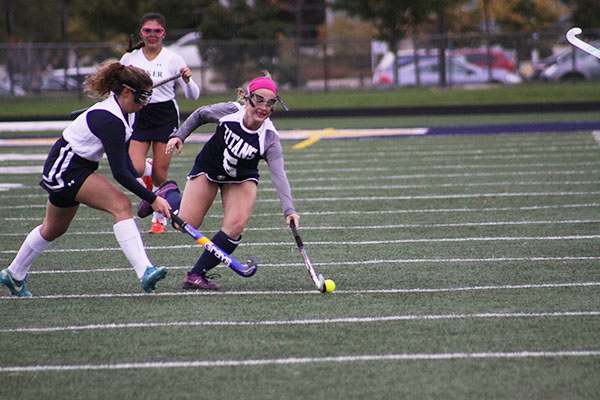 Lunging to avoid a defender, freshman midfielder MJ McNary, dribbles the ball down field during a game against F.W. Parker on Oct. 20.

The varsity women’s field hockey team, coached by Tom Rosenbaum, ended the season with a record of 12-7, according to Rosenbaum.

“It’s not just about the games we won [this season], it’s about how we won those games,” Rosenbaum said. “We’re a great team and they love being with each other and hanging with each other. We’ve beat teams that we’ve never beat before, and [the team] is a mix of older and younger kids, so it’s just fun.”

With great team chemistry, senior captain Callie Pekosh believes the biggest difference in the team this year is the depth of the team and what they offer on the field.

“I think the difference between this year and last is that a lot of people who start on our team have had experience playing either on varsity or travel [teams],” Pekosh said. “Everyone knows what they’re doing, and we move the ball really well. We’ve been scoring a lot more, and we have a higher seed this year than last year because of it.”

According to Rosenbaum, the team’s toughest opponents isn’t any other team they play against; it’s themselves.

“I think our toughest game is when we play ourselves,” Rosenbaum said. “I know that sounds crazy, but [when] we go out and we play our field hockey, we’re fine. When we start to worry about the opponent, their record and how they play, then we get away from our game and who we are. When we play our game, we can play and stay with anybody.”

According to Pekosh, the Titans played the best they’ve ever played against Lake Forest Academy when they won 3-2 on Sept. 16.

“[The game] was exciting and made us feel stronger as a team because we worked together to tie it and then beat them in overtime,” Pekosh said. “It was also a game that showed us how good we could be when we played our best. To come back, we moved the ball quickly on transitions and kept switching the field so we got past the defense for two open goals, and our goal in overtime was because of our communication and transitions.”

Besides the win against Lake Forest, the girls lost to Loyola on  Sept. 12 by a goal in overtime, according to Pekosh. However, the Titans placed in the 6th seed, which was higher than Loyola this year.

“[Being a higher seed than Loyola] feels really nice because I don’t think we’ve ever beat them, at least since I’ve been [playing],” Pekosh said. “We could’ve beat them, this year, but even though we didn’t beat them we still got a higher seed.”

As far as playoffs went, the girls lost in the second round against Glenbard West. The Titans lost 4-1, but according to senior midfielder Lindsey Karsh, the Titans feel they ended the season on a good note.

“It was a tough loss, but at the same time, we ended our season knowing that we played the best to our ability and that we gave them a run for their money,” Karsh said.“We gave it our all in the real game, and we tied at 1-1. In overtime, I think we were all just pretty exhausted especially when [the game changes] to 6 vs. 6. When we go a man down it’s even harder, and I think they have better stick skills than we did and took advantage [of that on the field].”