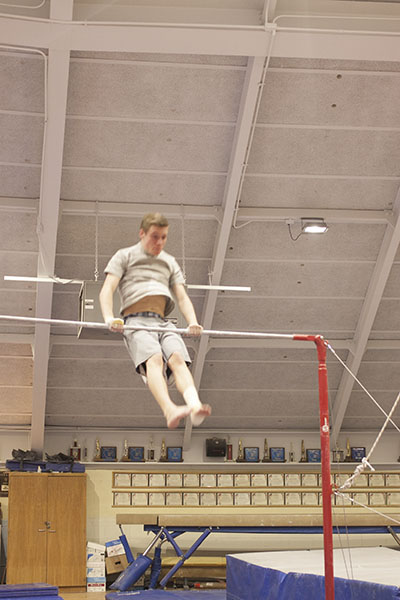 With an exciting season coming up ahead of them, and ranking as the sixth best team in state, the men’s gymnastics team is looking to make this season a memorable one, according to Captain Jeremy Fine.

, they are still looking to have a fantastic season, according to senior Konrad Michalak.

“There are major differences between last year’s team and this year’s, as we lost many of our key players,” Michalak said. “That doesn’t mean we’re any worse this year though. Quite the opposite actually. We have been striving nonstop to improve and overcome last year’s scores.”

On the other hand, Fine thinks that the team hasn’t lost talent since last year and is seeking for a much better season this year.

“We didn’t lose that many seniors from last year,” Fine said. “Because of that, this year, all of our younger gymnasts are having a major impact on the [team’s] score. Last year, many sophomores refined their skills to work towards helping the varsity team, and this year all of that hard work is paying off.”

The Titans have had a couple of nail-biting competitions that resulted in a dramatic win or a dramatic loss, according to Fine.

“We had a very close loss to Deerfield this season,” Fine said. “In that meet, we only lost to them by eight tenths of a point. Meets like that are very exciting because you know every little detail of your routine counts.”

Although the meet against Deerfield was a tough loss for them, the first invite at Hinsdale Central was something that the team would remember forever, Michalak said.

“We absolutely lost our minds when they announced that we had won the invite,” Michalak said. “The entire team erupted… and we rushed to that podium… It was an absolutely amazing experience.”

Another neck-and-neck competition that resulted in a win was the meet against GBN, according to Fine.

“We had a meet against Glenbrook North in which we beat them by less than a point,” Fine said. “If just one person on our team wasn’t as clean as they ended up being, we would have lost that meet.”

According to Fine, as the team keeps improving, the main goal for the season is to learn from their mistakes and master their skills from meet to meet.

“In the big picture, we would love to be able to qualify for state as a team,” Fine said. “We have the potential to do so this year and we are working extremely hard to make it happen. Score-wise, if we hit anywhere from a 145 to a 150, we will be overjoyed.”

As the the Titans are looking to win many of their future invites, the team will be heading to conference on April 30 and sectionals a week after.