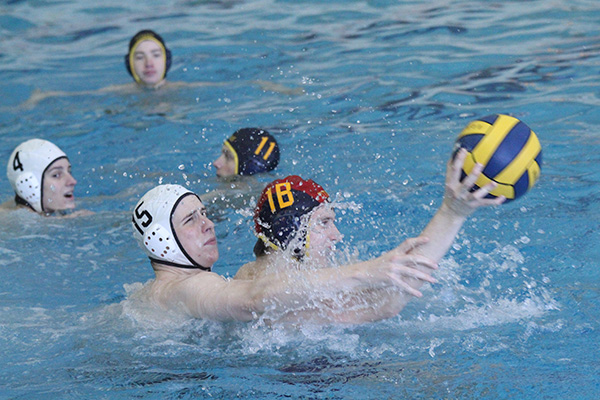 Despite starting off the season being somewhat lethargic, the men’s water polo team is improving with each game they play, according to head coach David Lieberman. Lieberman believes the team was rusty because some of the players had gotten rusty from not playing in the off-season.The team is doing well and currently has a record of       14-4-1 with losses to St. Viator and New Trier, according to Lieberman.

Senior captain Jordan Spalding attributes the St. Viator loss to the team’s inability to get going in the first quarter.

“We lost by a pretty good amount, but from the [second] quarter on we played really, really well,” Spalding said. “The first quarter they shut us out and just scored so many more goals. As a result we lost by a bunch, and if we had gotten off to a good start we could have won the game.”

As of now, the team believes that their best game was their first game against GBN during the Evanston Invite the weekend of March 20. They won 13-8, and during their second game against GBN, they won 13-6. Lieberman attributes the win to the team starting to play cohesive defense during the last three quarters.

“The first quarter was 5-5, [GBN] was playing great defense and they have a [star player that we] had to keep our eyes on,” Lieberman said. “Then, we focused too much [on him], and we didn’t adjust. Then we [adjusted our defense] in the second, third and fourth quarters and we took them out of the rest of the game… [GBN] only scored [one] goal after the first quarter.”

Lieberman believes that the team needs to work more on their defense, as he has a strong offense with junior Peter Dales, senior Paul Salay and junior Tommy Hagerty. Dales is the team’s leading scorer with 72 goals, according to Lieberman. Lieberman also wants the team to work on their fundamentals.

“I don’t want to do a lot of tactical stuff [with the team],” Lieberman said. “I think if they are really sound with their fundamentals and their technique in the water… then we will be able to out-play a lot of teams. I think once we start designing plays and running different things, it starts to get a little chaotic and things start to break down.”

The team’s main goal is beating Loyola at sectionals so that they can go to the state tournament, something GBS has not accomplished since 2009, according to Dales. Loyola won state last year.

“Loyola is always the toughest competition in our sectional,” Dales said. “Any team could win the title this year, because we are better matched up with Loyola than in the past.”

According to Salay, the team lost 13-11 to New Trier after being tied with a minute left in the game.

The team’s next game is the Titan Invite the weekend of April 25 at Glenbrook South.

The Oracle went to print on April 21.