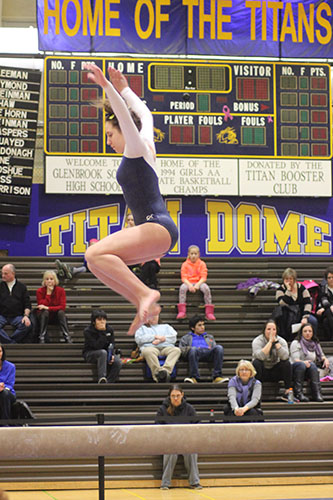 After losing four seniors from last year’s women’s gymnastics team, the Titans are currently ninth in state and are hoping to be successful at conference and regionals, according to head coach Steve Gale.

The team has won all of their meets except for one against rival New Trier, according to senior captain Kaci Castino. The team earned first place at the GBN Invite and second in the Palatine and Evanston invite, according to Gale.

“Everyone is doing well, they’re picking up new skills, refining what they have. [We’re looking] for a strong end of the season,”Gale said.

Even with many injuries, the team has been able to show great work ethic, according to sophomore Hannah Hartley.

“Everyone is a really key player, but the freshmen have really stepped up this year and have given it their all whether they compete or not… I think the support and motivation we all give each other helps,” Hartley said.

Even with the huge success from the team, Gale has been a major factor for the team’s success and has impacted many of their years at high school, according to Castino.

“Gale is awesome,” Castino said. “He’s been here for [all] my high school years in gymnastics and it wouldn’t have been the same without him.”

The team has been training with no meets since the New Trier match, and have been getting ready for conference and regionals which will both be hosted by GBS, according to Kaci Castino.

The team has been able to create high scores as a team and individually, according to Hartley.

Castino feels like it is much different from last year because she is the only captain. Understanding her role as a leader and role model, the team is very thankful for Castino, according to Hartley.

Having only one senior on the team, many underclassmen have been able to step up and contribute to the team as much as possible, according to Gale.

“I’ve got [freshman] Bebe Haramaras and Kylie Kruger and both are doing a great job,” Gale said.

With the upcoming competition, Gale believes  much improvement is needed through every practice.

“It’s a never- ending battle to improve on skills every day,” Gale said.

After winning regionals last year, the team hopes to do their best and win conference and regionals, according to Castino.

“As a team I think we just want to do our best, hopefully make it to state,” Castino said. “Mostly we’ve already reached a lot of our goals, so we’re already pretty proud of our team and accomplishments, but so far I think our main goal is to make it to state.”

On Monday Feb. 1, the women placed first in the regional meet with a score of  142.075. Allowing them to advance to sectionals.

The IHSA sectional meet will be on Moday, Feb. 9.