Football ready to ‘bounce back’ after Maine South loss 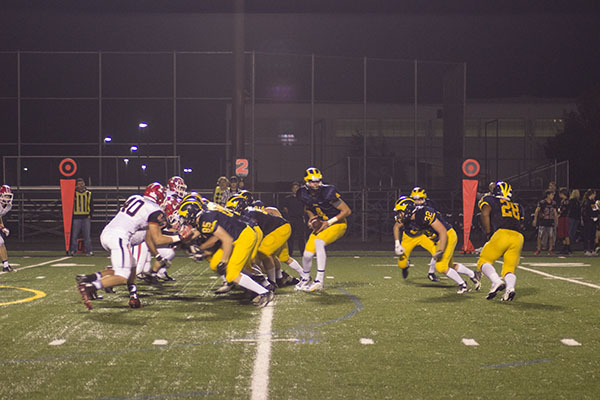 Starting their season with a 4-1* record, the Titans’ football team has been able to persevere through the adversity of injuries and game delays, according to head coach Mike Noll.

According to Noll, due to injuries, the Titans lost senior Dean Manesiotis early in the season, and soon after lost senior fullback George Hahn,  junior tailback Ryan Janczak, senior wingback Peter Pappas and senior wide receiver Austin Nowlin. Nolls says Pappas, Hahn and Janczak should be returning in the upcoming weeks or possibly before the Oracle went to print.*

In the first half of South’s first game of the season, GBS was down 0-14, but after half time and a rain delay, the Titans came back and won the game. The Titans finished with a win of 27-13.

“[We were] playing someone really motivated to beat us because they [haven’t before],” Noll said. “[Then] we rattle off twenty seven straight points, and that’s unique. That hasn’t happened a lot here, where we come back and win in the fourth quarter.”

According to senior captain Quinn Conaghan, simple mistakes and the team not playing cohesively were contributing factors to South’s slow start. Conaghan said that there were many positive attitudes on the sideline, encouraging them to turn the game around.

“Everyone was being positive and [saying], ‘We’re not going to lose this game, we just have to get it together,” Conaghan said. “There was no doubt we [were] going to win.”

Sep. 5, the day of the Titan’s first home game against Metea Valley, weather conditions left some skeptical of whether the game would take place. The weather later did come into play when the power went out during the game. According to senior Sean McDonagh, he didn’t feel like the delay in gameplay affected the Titans, but instead gave Metea Valley an advantage as they were losing before the break.

“I think it was a time period where Matea could refocus and that’s when you started to see them come back and tie the game up,” McDonagh said. “I think that played against our advantage because they didn’t have any momentum, and I think they were really down on themselves and their coach must have said something to get them going because they seemed like a new team after that.”

Through the delay and weather conditions, South was able to win the game 33-30 on a game winning field goal by junior kicker Henry Tarbox.

“I was pretty nervous when I saw that the play was developing and [me kicking] could be an option, but once I ran out there and we set up [for the play] I was not as nervous, ” Tarbox said.

According to McDonagh, even though South started their first two games against Metea Valley and Prospect behind, he felt it was an accomplishment for the team that they were able to come back and take the win.

“I think last year’s team maybe would have quit on the game if we were down early,” McDonagh said. “It shows the character of [this year’s] team that we can come back from games and [Noll] is really proud of that, even though maybe some of those games, shouldn’t have been that close.”

According to Noll, being able to play strongly during the fourth quarter was a goal he set for the team this year.

“You can put kids in adverse situations and hope they respond properly in practice,” Noll said. “Then when you get in a game and it’s loud and new things are happening that you didn’t expect, it takes mental toughness to persevere.”

In another game against Deerfield on Sept. 12, the men were victorious with an end score of 43-6. The men played Niles North on Sept. 20, winning 51-7.

“[The Deerfield game] was a great team win,” McDonagh said. “Everyone contributed and it was awesome to see some of the guys who [don’t] get to play as much in the other games, get on the field and play.”

According to senior quarterback Fitz Stadler, before the game the team was practicing to face Deerfield’s unique defense.

“The defense [was] different,” Stadler said. “But obviously we work hard every day at practice and try to get it done, [to] become a team that is prepared every Friday night.”

Though there are multpile playmakers on the team, it is more about exceutions made by the team, Stadler says.

“Every week we kind of [have] a different game plan about who we’re going to attack and what plays we are going to run and it really becomes a team effort in the end,” Stadler said.

The Titans suffered their first loss of the season against Maine South on Sept. 26 with a score of 42-7. Conoghan and McDonagh both agreed in the team’s ability to come back and be ready for their game against Evanston.

“I’m extremely disappointed but I’m confident that we will bounce back and compete hard against the rest of our conference moving forward,” Conoghan said.

*The Oracle went to print on Sept. 30