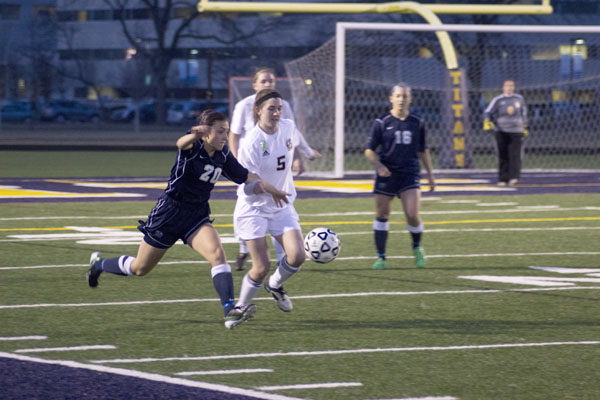 The women’s varsity soccer team kicked off the season with a record of 2-1. The Titans faced North on April 6 at Toyota Park, home of the Chicago Fire.
The team beat the Spartans 5-0 with goals made by senior Taylor Fuderer, juniors Kaily Bruch and Tami Erlich, sophomore Olivia Peters and freshman Lily Sands.
According to senior captain Olivia Pullano, the match was memorable in that the team played at a field where some of the best soccer players in the nation have competed.
“The game against North was really an exciting experience and playing GBN is always a fun game because of the rivalry,” Pullano said. “It was so nice of our coaches to work together to give us the opportunity to play on a professional field.”
Last season the team ended as the CSL Conference champions and the Regionals champions. According to senior captain Madison Krug, though the team has high standards to live up to, the girls have been working hard to improve their skills.
“One strength of our team is that we have a lot of speed [on the field],” Krug said. “We struggled with possession at first, but we have been working on it the past couple of weeks, and we are [steadily improving].”
The team is exactly where they want to be, according to Coach Seong Ha. Ha believes that the talent present in the program will take them strides above their expectations.
“[With many] returnees on the [varsity team this year], I feel confident that they can put our team in a really good position for the state playoffs,” Ha said.
Pullano believes that the coaches have done a great job in helping the team improve their technical skills and have put them in the best position to be successful out on the field.
The team’s main goal for the end of the season is to make it to the state playoffs and according to Ha, the girls who have stepped into vacant leadership positions will help lead them there.
“As the season goes on, we hope to go on a winning streak, and I really feel confident with these girls, […] that we can put our team in a good position for the state playoffs,” Ha said.
This year’s team is rounded out by a large number of upperclassmen including seniors Beverly Hamilton, Jessica Vasallo and senior captain Nicole Sroubek.