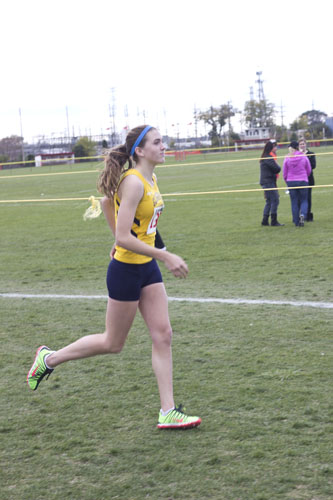 Sophomore Anne Brennan had the run of her life and made all-conference in this year’s Central Suburban League Division Conference for cross country for the second year in a row.

According to Brennan, she started running track in 6th grade on her middle school team. She was first introduced to running at a young age when she ran 5K races along side her father and cheered on her uncle in Ironman races.

“When I was 7 and 8 my dad always signed me up for triathlons,” Brennan said. “I enjoyed running for fun like that. It kind of made me a better runner even when I was younger. Now I appreciate that he did that because if I hadn’t have done that […] I wouldn’t be as good as I am today.’’

“She started the year off inexperienced,” Kocian said. “South alumnus Mollie McMahon, who was one of my best runners, helped pace [Brennan] for the first part of the season. By the time we got into the middle of the season [and] the end, [Brennan] knew her pace.”

According to Kocian, it was very windy and rainy the day of the conference meet; conditions were unsatisfactory for the runners and observers. According to Brennan, she really pushed herself to finish the race strong and was able to take the last spot to qualify for conference.

“You have to be in the top 14 runners from your division,” Kocian said. “She was in 18th place, […] and I said that, ‘You have to get that Evanston girl that is in front of you,’ and she just kicked it in and got her.”

According to Jamie Studenroth, senior captain, Brennan really pushed herself and pulled it out when the race was at its peak.

“She passed the girl, and she didn’t even realize that she got all-conference if she beat her,” Studenroth said. “It didn’t occur to her until there were 100 meters left.  It was just so exciting because becoming all-conference in cross country is really hard because we have so many all- state runners in our conference.”

According to Kocian, as a cross country coach, it is hard to watch all runners at all times because during races, they run complex  courses, and he can’t always keep track of each runner.

“Last year was sort of hard because the way the course is, they run out and do a big loop  […] You could run them and see the progress, but there was not a whole lot as a coach I could do,” Kocian said.

Although Brennan has  had many accomplishments in her last two years on South’s team, during a race last year, she discovered something that has greatly impacted her running career. Brennan said  she started feeling lightheaded, dizzy and was having trouble breathing. She still continued that race and finished it, unsure of what caused her to feel that way.

“I went to the doctor and I found out I had asthma,” Brennan said. “I was like, ‘I’m a runner, I can’t have asthma!’ Now I have an inhaler that I have to carry on my hip during every race and it helps a ton.”

Brennan said, she isn’t quite sure where cross country will lead her, because she has yet to explore that possibility, but she hopes to continue throughout high school and maybe college. Brennan said she is more interested in soccer, which is another sport she plays alongside her sister, Lauren Brennan.

“It’s fun to have a sister [in the same sports] and just to be able to talk about it at home,” Anne said. “She pushes me to do my best and we motivate each other to try our best. Not a lot of people can say they have a sister that does the same two sports as they do.”