Are these weird food combinations disgusting or delicious? 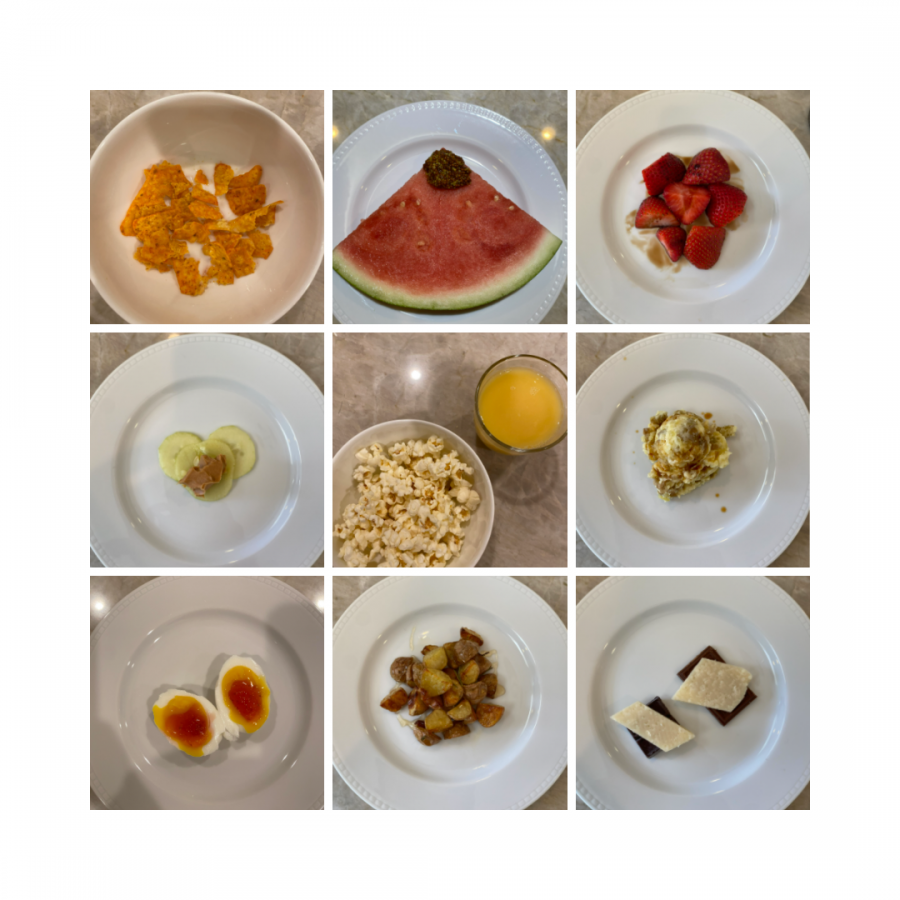 Seeing famous TikTok Star, Mia Challiner, post videos of her eating strange food concoctions made me want to try something similar and share some of my favorite, and not so favorite, weird food combinations. All of Challiner’s combinations were unique and not something anyone would ever order at a restaurant, or go to a store to pick out. However, as a foodie, I was eager to try certain combinations like strawberries and balsamic vinegar, but I was less than thrilled about trying pickles and peanut butter.

To be clear, you’re not going to find any of these food combos for sale in a grocery store, but I hope they open your eyes to some new tasty, yet unexpected, food options.

Let me start with my favorite snack: popcorn and orange juice. This combination might at first sound odd, but taking a handful of popcorn and following it with a chug of orange juice is amazing.

I have been eating popcorn while drinking orange juice forever and it has to be this specific juice – no other juice will suffice. Trust me, I tried them all. There is something magical about eating crunchy buttery popcorn and then capping it off with the taste of a tangy orange citrus drink. Even though this is my favorite out of all of the combinations, I don’t think it is that over the top delicious and it doesn’t scream 10/10. I rate this an 8.5/10.

The next combination might sound weird, but somehow it just works.

First, I prepared the potatoes and because I didn’t peel them, since it adds texture, I rinsed them with water and then diced them so it will take a shorter time to cook. I added the potatoes in plain boiling water and waited until they were tender – you will know they are ready when a fork can be stuck through them. Then I strained the potatoes with a colander and added them back in the same pot and mixed a pinch of salt, two tablespoons of butter, and a fourth a cup of sour cream to make tasty and fluffy mashed potatoes. Don’t put too much salt in when making the potatoes because to complete this dish, you will need to add a drizzle of soy sauce, which has plenty of salt of its own.

The creamy mashed potatoes mix so well with this sauce. In my head, it’s a logical combination because soy sauce is just like adding salt to your mashed potatoes. This combination is great, but too much of this dish can get a little old, so I often like to mix it up by substituting an earthy truffle salt which always seems to work. Having this once in a while is great, but you can’t make it too often or it loses its luster. I rate this a 7.5/10.

I’m still surprised by this combo – because it was absolutely delicious and I will be eating it over and over again. Say hello to strawberries with balsamic vinegar.

The bite starts off very pungent, which initially confused my taste buds. Eventually, the bitterness wears off before I was overwhelmed with an explosion of sweet berries — it’s an amazing combination that I love.

For those of you who don’t enjoy sweet foods, the balsamic vinegar cuts the slightest bit of sweetness in exchange for a contrasting tart flavor. And adding this to a salad with a touch of creamy burrata cheese, peppery arugula, basil, and pistachios for a crunch, tastes fabulous. Both are delicious together, but I think it pairs better as a salad. I rate this an 8/10.

I’m a big fan of both peanut butter and pickles, but the thought of combining them caused my stomach to churn. I was certain I would hate this combination, but it turned out to be surprisingly tasty.

I used my favorite pickles, Bubbies Bread and Butter, which helped because they are a sweet and tart pickle, which mixed quite well with the Skippy’s Creamy Peanut Butter. I kept telling myself that I wasn’t going to like it, but lo and behold, I actually liked this combination. The crisp crunchy pickles and the smooth peanut butter created a satisfying texture with a tangy flavor. Even though this combo proved surprising, I still prefer pickles and peanut butter separately. I rate this a 6.5/10.

Watermelon and mustard was another combination that sounded gross, and…it was.

Just looking at the watermelon slice with a dollop of Maille old-style mustard disgusted me. I chose whole grain dijon mustard because it has texture and is more refined, pungent, and has a kick compared to the artificial yellow mustard. I didn’t mind the flavor because the mustard had a somewhat bitter taste and it added texture, but it was far too unusual and odd. I will never eat this again, but this combo opened my eyes to a new salad idea featuring watermelon with a mustard dressing. I rate this a 3/10.

Even though I love both Doritos® and milk, I was really disgusted with this combination. As I prepped for it, I thought I would be eating soggy chips in cheesy orange milk. As I got ready to taste it, I was partially right – the chips were indeed soggy – but it was a unique experience in that I felt like I was eating Doritos® with a spoon. The milk added no flavor and ruined the texture of the chips, but for some odd reason, I didn’t mind eating this mess. That said, I would much rather eat the chips by themself. I rate this a 5/10.

I wanted to give this combination a fair chance, so I tried it with two chocolates, Hershey milk chocolate and a German chocolate. I paired both chocolates with a nutty Parmigiano Reggiano. I cut two sections of the chocolate and placed two cut slivers of cheese on top for a terrible bite. I really did not like the cheese with the Hershey chocolate as I had no idea what was going on with my taste buds from the overpowering sweetness. The Hershey chocolate did not mix with this fine Italian cheese and it turned out to be a waste.

Next, I paired the cheese with the German chocolate, which is sweeter than a semi-sweet chocolate and is 48% cacao.I thought it started out with some potential as both the flavors fused together into a nice bitter but creamy sweet bite. However, moments later, I no longer cared for it because the chocolate was once again, way too overwhelming. I rate this a 4/10.

I honestly had higher expectations for this combination, but it proved to be far too bland. Maybe it was my fault for not adding more seasoning, but I did add rosemary and thyme because I thought it would pair nicely with the honey – which it did. The crispy, oven roasted potatoes had notes of sweetness from the honey, which almost tasted like maple syrup. I added some sea salt – which helped enhance the honey flavor and made the snack more flavorful compared to how it was before. I would use this combo as a side dish with a lemon grilled chicken and a green vegetable like asparagus. The chicken would add some citrus and cut the sweetness from the lemon while the asparagus would add color and it never hurts to get some greens in. I rate this a 7/10.

I actually thought this combination would work well mainly because they both are involved in breakfast. Well, I was wrong —  this snack was disgusting.

Maybe the strawberry jam was overly sweet and a tarter jam would work better, but the jam definitely did not compliment the egg. I paired it with a soft boiled egg, which is my favorite way to cook an egg, but nothing was working well with this sweet and savory combination. I rate this a 1/10.

I had a lot of fun with this experiment and I really enjoyed a lot of these combinations, but some were either flat out gross or certainly not good enough to make ever again. I enjoyed preparing and trying all these items, and I hope this article leads you to be more adventurous and opens your eyes to new concoctions. However, regardless of where these weird food combinations take you, do yourself a favor, and stay away from the egg with jam.