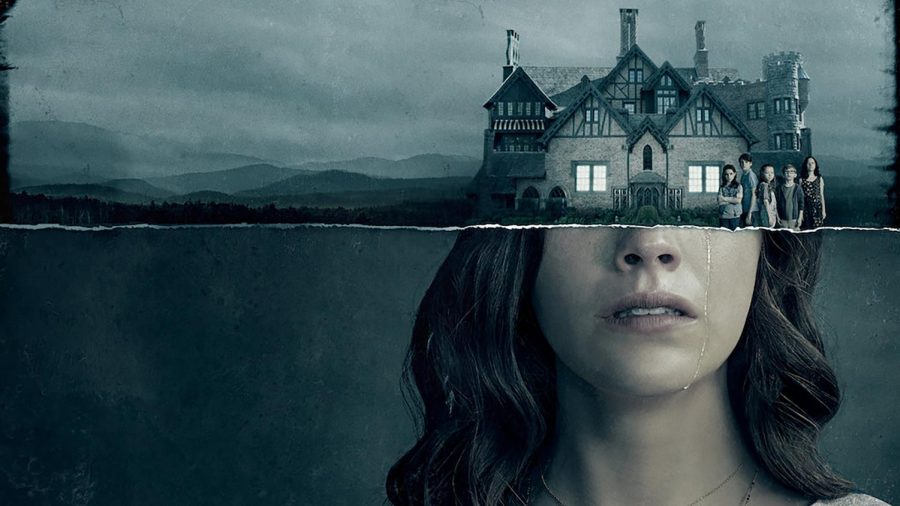 Crying Crain: Posing for the cover of the Netflix original series, The Haunting of Hill House, Victoria Pedretti is an American actress who is best known for her role as Eleanor “Nell” Crain in the television series. Source: Netflix

The Haunting of Hill House is more than just a ghost story. Based on the 1959 novel by Shirley Jackson, The Haunting of Hill House was recently adapted into a single-season show by Mike Flannigan and is currently on Netflix. From the start, I was immediately hooked by the incredible character development and prominent themes, specifically the one demonstrating how the exact bonds that tie a family together can be the ones that suffocate an individual most.

Throughout its ten bingeable episodes, the point of view darts between the past and present to explore the Crain family and the Crain children’s trauma, showing how past suffering shaped them as people well into their adult lives. In short, Flannigan crafted a masterpiece. He manages to provide a surplus of scares but also deliver important messages about family and values, making the show that much more impactful.

Being a thriller and horror fanatic, I’m constantly searching for something well-crafted that is truly scary and leaves me wanting more, which is often hard to come by since most shows that fall under this genre are cheesy and overdone. That wasn’t the case with The Haunting of Hill House, which manages to have substance while also leaving you covered in goosebumps. The show follows the Crain family of seven as they move into “Hill House,” an old mansion, with the intent of flipping and reselling it. However, as they continue to live in the house, the family comes to realize it’s more than what it seems, and they cannot escape its twisted past.

Hill House is truly haunted, though not in a typical sense. Sure, we see our fair share of ghosts and ghouls in the show, but we also see that the house itself has the ability to feed off of the family’s feelings and fears. This is what makes it dangerous. Hill House exploits the family’s deepest secrets and shows them in the form of truly haunting “ghosts.”

“Ghosts are guilt, ghosts are secrets, ghosts are regrets and failings. But most times, most times a ghost is a wish,” Steven, the main character, said.

This is what I love about the show. The way that not only are there things to fear within the house, but the house itself is to be feared as well.

Another well-done aspect of the show is the flashbacks. By incorporating these into the show, we are able to see the characters change and mature over time. The flashbacks demonstrate what the main characters endured as kids, which viewers can then piece together to determine how these past events played out into who they’ve become as adults. The flashbacks give us the full story in bits and pieces, which delivers a sense of delayed gratification.

Overall, The Haunting of Hill House is cinematically beautiful and pleasing to the eye. Every scene was filmed so carefully, and the camera angles added to the thrill of it all, with a wide shot of the house’s landscape, or a close up of a character’s facial expression. Comprised of songs like “If I Go, I’m Going” by Gregory Alan Isakov, a beautiful song about love, I especially love the soundtrack, enough for it to make its way onto my playlist. The song, “Through the Fire” by Jake Etheridge, is another reason to love the soundtrack; it’s a mellow song and is played during one of the show’s sadder scenes.

The Haunting of Hill House is everything I had hoped for and more: captivating, chilling, and original. I feel for the characters while also growing increasingly apprehensive of what lurks in the shadows. I would recommend this to anyone wanting a good scare, or a deep story about family ties and how far people will go to protect the ones they love.