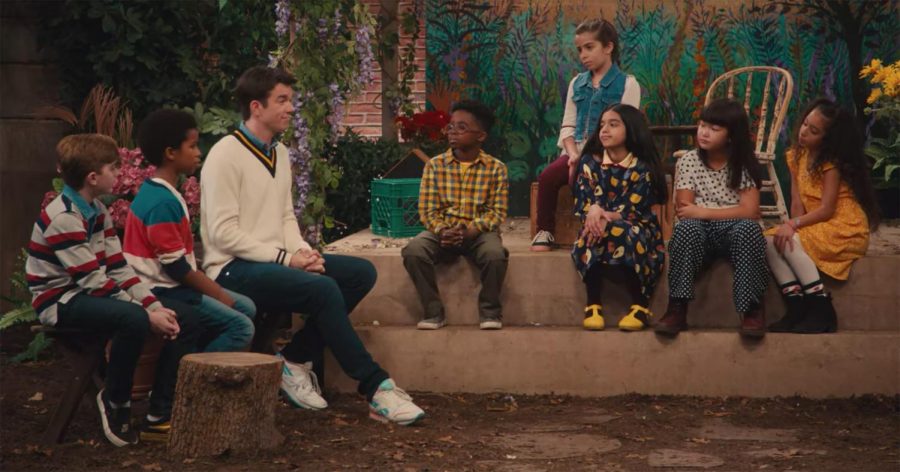 Comedic Cast: Sitting amongst a group of children, Mulaney discusses existential topics with his “kid pals,” including their biggest fears and the purpose of life. John Mulaney & the Sack Lunch Bunch reminds its audiences that a good laugh and good deeds can go a long way. Source: Netflix

Children’s television is an interesting genre. It has traditionally been innovative and creative, opening new doors to those still adjusting to the world around them. It evokes a certain nostalgia for those who, like me, were raised watching a lot of it. For my generation, these shows included classics like Dora the Explorer and The Backyardigans; for comedian John Mulaney, these shows were Sesame Street and Mr. Roger’s Neighborhood.

In Mulaney’s Netflix special John Mulaney & The Sack Lunch Bunch, he attempts to bring back the magic of the media by resurrecting the formats of the programs he grew up on and blending it with the surreal existentialism present in modern meme culture. The show pulls it off, not without some bumps in the road, in a way that can amuse children and adults alike.

The existentialism is strong right out of the gate, as the special’s opening credits are blended with 11-year-old Jacob, a member of the Sack Lunch Bunch, recounting his greatest fears. Among them is the fear of drowning.

It’s a weird way to start a children’s comedy special. And the fears of the kids in the Bunch become a recurring motif throughout the show. Linder, age 9, is afraid of Jordan Peele’s Us; 12-year-old Ava’s biggest fear is home invasions. Mulaney’s interviews with the children regarding their phobias are used as transitional sequences, despite not really fitting into the show at large.

The rest of the special is more upbeat and clearly modeled off of classic kid’s shows, and the first scene at the Sackett Street Garden set, which sets the stage for much of the special, is a great example of what Mulaney can do. His chemistry with the kids of the Sack Lunch Bunch is incredible, and the ability for these children to deliver deadpan lines that riff off of Mulaney’s introduction is impressive. It is these scenes, where Mulaney and the kids have the ability to build off each other’s lines, that The Sack Lunch Bunch finds its rhythm.

However, after the introduction, the first musical number begins. Don’t get me wrong, the music is good. The kids are talented performers and definitely know what they’re doing, and some of the songs really hit it out of the park. “Algebra Song!” and “Music, Music Everywhere!” are two stellar songs and make great use of guest stars (actors Andre De Shields and Jake Gyllenhaal, respectively). But, despite the songs being well-written and funny, they’re not what I expect from Mulaney, and the sheer number of them takes time away from the performative comedy that he and the Bunch both excel at.

And, like all children’s television, John Mulaney & The Sack Lunch Bunch wraps up with a sappy and sentimental ending. In spite of its unoriginality, it feels important, not just for the audience, but for the kids, Mulaney and for everyone working on the show.

What struck me as most impactful of the entire series was its depiction of kindness and humor as two interconnected things that can live symbiotically. As people, we’re often quick to assume comedy is performed at the expense of an individual, but Mulaney’s comedy special gives its audience the laughs and feels simultaneously, completely debunking the inverse relationship between the two.

It’s helpful to hear that, at least for me. I’m at a point in my life where I struggle, sometimes, to remain myself. When it comes to school, I often find myself getting caught up in the never-ending pile of assignments, tests and projects. But, looking back on my childhood years, I realize that I’ve lost contact with my creative side. Maybe I just need to kick back one afternoon and watch more kid’s television.