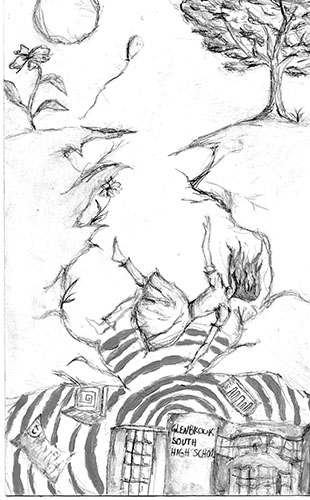 The memory of the first semester of my junior year is one I’d very much like to forever destroy in my head. The intensity of my classes, combined with a dense work schedule and a resurgence in anxiety, made me miserable. The compensation of a fat paycheck was nice, yet rather insufficient in resolving the conflicts that lingered because of its existence. Surprisingly, money did not solve all of my problems as expected, but, for whatever reason, stress did.

I refer to this as my “mid-high school crisis,” which, rest assured ladies and gentlemen, is patiently awaiting a trademark. It’s that moment when adulthood’s shadow lingers behind you attempting to snatch the teddy bear that represents your childhood.

Ah, yet another retelling of the classic tale of over-exerting yourself in all aspects of your life, thinking you are Superman when really you’re Cinderella with no Fairy Godmother by your side. This existentialism is often visible in adults approaching old age. For example, my dad, in an attempt to relive his glory days of playing the keyboard in his band, re-pierced his ears. In fact, he asked to borrow a pair of my studs for this very purpose, which were never returned, might I add.

Moving on from my father, who refused to accept that he cannot relive the past and should instead work to make his current life as exciting as his youth (no ironic big lingering theme here!) I found my father’s struggle comedic, but failed to pay attention enough to learn from him when I encountered my own crisis.

My father tried to revert to his pre-fatherhood years in the same way I tried to revert back to my childhood. I avoided responsibility at all costs and I suffered because of it. Though my sleep schedule was very much reminiscent of my youth due to the excessive nap-taking, I still wasn’t satisfied.

As I type these words, the Monday before finals, with my math packet next to me, notably untouched because of the impending void that wills me to write instead of study, I feel relief to be out of my crisis.

There is definitely no relief regarding my math final, but I feel better with every word I type. Writing is the most control I’ve been able to obtain recently. These past few months, I constantly wondered if my actions were even worth the time and effort, yet feared for my future without it. I still wonder if I know what I’m doing, but not to the same extent.

The emptiness I presume my dad felt was reflected in my own crisis. Every positive from improving grades to relationships were all countered by doubt and the imminent pressure to exceed which inevitably led to a significant downfall in something much more important. It was me who tumbled down a rabbit’s hole and spiraled into Wonderland.

My advice: too much stress ages you, as evident by my constantly aching back that needs to be soothed like an old lady’s. Take care of yourself, but not to the extent to when you start to annul your work ethic in the name of self-care. My indecisiveness to work hard or take care of myself made each week a struggle, filling out and completing each task in my $22 floral print planner one week and procrastinating the next.

My mid-high school crisis came to a screeching halt when a revelation in my most stressful class shocked me: a little bit of stress provides an incentive to carry on. I wasn’t the only one struggling and my problems didn’t make me special or incompetent compared to everyone else; in fact, it made me normal.

This advice would’ve been appreciated sooner, but I am just as grateful for it now. Though the notion of returning to another lifetime in which stress is nonexistent is attractive, it’s not feasible, which  leads to constant disappointment in the life you lead now.