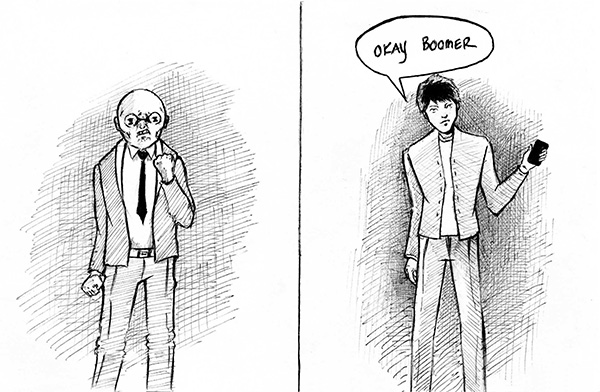 Do me a favor real quick. Take out your phone, open up whatever music app you use, and listen to The Who’s 1965 hit “My Generation.” You’ll hear a raucous anthem penned by guitarist Pete Townshend about how he hopes he dies before he gets “old” because the older generation just won’t stop trying to put him down. Townshend didn’t actually want to die an early death, but he saw “old” as a state of mind for dismissing the youth for their contributions to the culture.

Sound familiar? It should, because “My Generation” was really just Pete Townshend saying, “Okay, Boomer.”

In reality, “Boomer” is a state of mind. Therefore, a Millennial can be a Boomer. For example, it wouldn’t make sense to say “Okay, Boomer” to Senator and Democratic presidential candidate Bernie Sanders because, agree with his politics or not, his beliefs are sourced in what’s best for the youth, not as much for his own personal interests. Despite this, “Okay, Boomer” has been criticized as ageist, peaking with a tweet from conservative radio host Bob Lonsberry claiming that “Boomer” is, “the n-word of ageism.” (He was predictably littered with replies of “Okay, Boomer.”)

So, is “Boomer” ageist? It depends on your perception. Most of those using the meme don’t do it with the intention of criticizing every single Baby Boomer, just the ones that have been chastising them. The Millennials who grew into adulthood when the Great Recession hit have dealt with economic scrutiny but are just told to “work harder” by the stereotypical boomer. In that respect, their contempt is justified.

“Okay, Boomer” is synonymous with Millennials and Gen Z looking to have their voices heard in America. Millennials are no longer the generation of young people navigating their way through technology. They’re a generation struggling to afford adulthood, a fate that the neglected voices of Gen Z will soon be subjected to.

Many of the problems the Boomer mindset places on younger generations are the fault of the actual Baby Boomers. The latter inherited the perfect economy for young people to find success in, then pulled up the ladder once they reached adulthood, criticizing those of us who can’t climb it.

I know this is the opinions section, but here’s a newsflash: a changing of the guard is occurring. The Millennials and Gen Z are the future. The Baby Boomers shouldn’t step aside because that’s a ridiculous thing to ask of them.

However, it’s equally crazy to tell Millennials and Gen Z, two generations that will be roaming this planet and running this country long after the Baby Boomers are gone, that they haven’t lived long enough to voice their opinion.