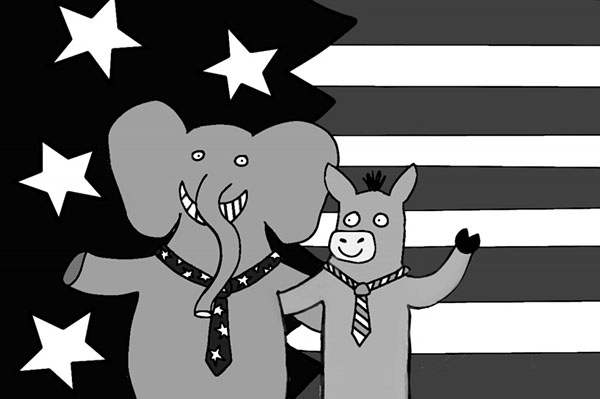 The 2016 presidential election brought on many distinct changes to our country: a new national leader, a different party taking office, and most apparent in our community, the unwillingness to discuss political beliefs.

From a young age, we are taught that the country’s political make-up consists of several parties, the two most prominent being Democratic and Republican. With potential influence from family members, friends, and community, most start to develop strong opinions on the policies needed to run the country. In 4th grade, I first began to hear students telling others that they were a “Democrat” or “Republican,” wondering, myself, what it meant to be either. Shortly after, I found my eyes locked on the television screen, keeping up to date with the news and forming my own political beliefs.

Having friends from both parties, I was often in political disagreements that required an open mind, encouraging me to view things from multiple perspectives. However, once the most recent presidential elections were concluded, a change started occurring, and it seemed as though my friends who were once Republicans now categorized themselves as Democrats, out of fear of judgment.  Likewise, friends who were Democrats seemed to avoid talking about politics around Republican friends who may dismiss them as “left-wing.”

Following Trump’s inauguration, a new social stigma around political discussions seemed to form in our high school community. Assumptions were quickly made and perceived differences between the political parties became so drastic that discussing policies with opposing beliefs seemed nearly impossible.

A failure to engage in political discourse with members of the opposing party seems to have added to the schism. In fact, a recent study by the non-profit organization “More in Common,” called the “Perception Gap,” looked at the disparity in the assumptions and reality of opposing political party members’ beliefs, supporting this idea. For instance, the study found that Democrats estimated that only 50 percent of Republicans recognize that “racism still exists in America,” while the actual figure is 80 percent. Likewise, Republicans guessed that only about 50 percent of Democrats are “proud to be American,” while in reality, more than 80 percent stated that they are. This proves that our failure to openly discuss our political views adds to misconceptions about opposing party’s beliefs.

But, even if our political discussions confirm major differences in our views, that is still a positive development. America has built its reputation on the ability to have a vote; to that is still a positive development. Although it has been found that the parties share many similar views, taking their opposing beliefs as a threat results in a loss of diversity of ideas that will cause our country to suffer. Consider listening to another perspective a challenge, one that should be approached with confidence and with peace.

We should not take diversity of opinion for granted; our country depends on it to offer new ideas from a variety of demographics. Not believing in that of which the majority supports, whether that be liberal or conservative views, should not be discouraged, and is only a greater reason to engage in political disputes.

Enlightenment philosopher Voltaire once said,  “I do not agree with what you have to say, but I will defend to the death your right to say it,” expressing a truth that we should all learn to uphold, and supporting the idea that the future of our community depends on the willingness to foster an accepting environment for all political identities.