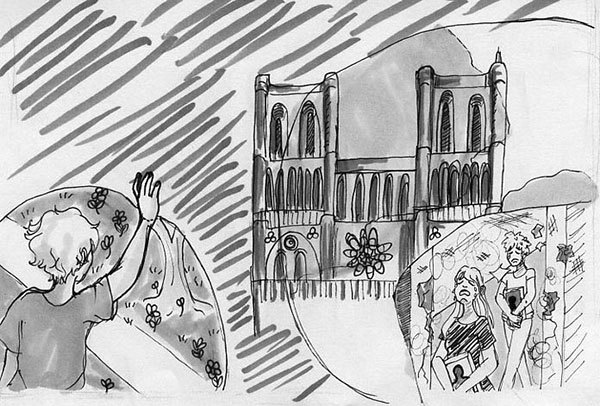 Humanity. To me, humanity is not defined by race, religion, gender, sexual orientation, political identification, or ability. Instead it captures love. Whether it be greeting someone in passing, picking up trash on the side of the road, or empathizing with a story, we all love subconsciously. This is what makes us human.

This past month, as I watched the news and scrolled through social media, many devastating narratives caught my attention. The burning of Notre Dame, a wave of bombings in mosques across Sri Lanka on Easter Sunday, and a shooting inside of a synagogue near San Diego, California. I am not Catholic, Muslim, or Jewish, however I empathize with the pain of helplessly experiencing the loss of family or watching the destruction of a symbolic figure of faith.

I opened my eyes to worldwide injustices, and I believe empathy is the strongest force to fix them. For example, some of my friends are Muslim, and as they celebrate Ramadan, the ninth month of the Muslim year, many partake in strict fasting from sunrise to sunset while attending school. I heard the controversy surrounding the holiday marking the end of their fast, Eid al-Fitr, taking place during finals. Being that school comes to a halt during the holidays I celebrate, I could only empathize with their disappointment.

As junior Yasmeen Mohammed Rafee illustrates, “We have school off for Yom Kippur, Rosh Hashanah, Christmas, and Easter, and people are allowed to spend time with their families on these days, and even though I understand that Muslims are a deep minority at Glenbrook South, it still does hurt to remember that I won’t be able to celebrate the best week of my religious life because I will be studying for school.”

I decided to fast for a day to better understand the Muslims who fast at school. What started as initial rumblings in my stomach progressed into heavy fatigue. It was difficult to be around students who were not fasting, especially when they were eating. It was difficult to participate in class, let alone to stay awake. I can’t imagine how fasting would impact my finals.

Throughout my fast I heard criticisms that fasting is a choice for Muslims.

Mohammad Rafee responds “The lines between what’s mandatory in religion and what counts as a choice are all very blurry.” It might be a choice, but the schedule should not make the decision for Muslim students. Everyone should get to celebrate, no matter their religion.

I challenge people to lead with empathy. When we care for one another and focus on each other’s similarities rather than differences, life is not unnecessarily difficult. See the humanity in others rather than labels.