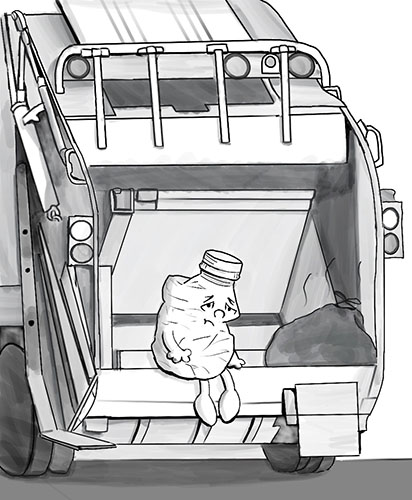 You open up the fridge in the cafeteria and look at all the possibilities Quest has in store for you today: Starbucks, Pure Leaf, Pepsi. . . the options are endless! But one bottle in particular catches your eye. Tall, slender, 100% plastic with a dazzling piece of art on the side. There it is. Coveted. Inspired. Life Water.

Of course, you don’t think much of its plastic contents then, nor do you when you toss the bottle in the trash at the end of lunch. But where is that bottle really going?

Inside the cafeteria garbage, your Life Water will be contaminated by a myriad of lunch leftovers. You name it: pasta sauce, chipotle mayo, pizza grease, Taki dust and the remnants of the single Jello sold that day, all coating that once-so-spectacular Life Water.

Glenbrook South has two processes of getting rid of unwanted material. According to Science Teacher James Glynn, the cardboard, mostly from Quest Food Services, gets automatically recycled, while the rest of the waste goes to a treatment facility where the majority ends up at a landfill.

Additionally, recyclable materials aren’t as commercially desired by foreign nations such as China who have historically purchased them from the U.S., as is the case with photocopy paper that is used at South.

“The fibers in the [photocopy paper] are too short to be made into any useful products plus they are harder to deal with than the cardboard,” Glynn said. “[Other countries will] take it but overall a school this large with the kind of stuff we recycle and the people involved, right now nobody is actually buying recycling material. I don’t know how much better we could do in the immediate future.”

Though possible to take measures to ensure that cross-contamination does not occur, the Oracle Editorial Board understands that realistically speaking, students may be careless about the waste protocol, and the recyclable waste would end up contaminated anyway. The current process of waste disposal is the most realistic in this situation.

In the future, the Editorial Board hopes the school can create a recycling process that is more efficient and cost-effective. To do so, the realities of international economics would have to shift to embrace a new recycling process.

However, issues such as climate change and global warming are real and pressing, and unless action is taken soon to combat these processes, there may be detrimental effects. According to the Gale Opposing Viewpoints Online Collection, effects of global warming include stronger and more frequent hurricanes, droughts and fires, severe flooding from rising sea levels, loss of biodiversity and ecosystems, and loss of farmland resulting in famine.

For the time being, the Editorial Board encourages the GBS community to employ different methods of conservation to reduce the quantity of pollution and our ecological footprints. The following suggestions are realistic for teenagers within and outside a school setting.

For example, exchange plastic water bottles for a glass or metal one—they are much better for Mother Earth. If you’re missing the pretty artwork of Life Water, decorating a reusable water bottle with stickers is a great alternative.

Drive to school? Pick up a couple friends on the way. According to rideshare.com, every car annually emits its own weight in carbon dioxide, a greenhouse gas, into the atmosphere. Carpooling could cut transportation emissions numbers significantly. Not to mention, it’s a great Carpool Karaoke opportunity.

Next time, opt not to take a paper copy of a school assignment. If it’s not already a PDF on Google Classroom, ask your teacher if they can upload it.

Don’t think a vegetarian or vegan lifestyle would work for you? You can make a difference by refusing meat for just three meals a week. According to the Earth Day Network, if the entire U.S. population didn’t eat meat or cheese for one day a week, it would be the equivalent of taking 7.6 million cars off the road, or driving 91 billion fewer miles.

Instead of using two or three paper towels when you wash your hands, try using the hand dryers instead. Those brown paper towels aren’t very absorbent anyway.

When you go out to eat, don’t take a straw for your soda. Instead, ditch the top or invest in a reusable aluminum straw. Don’t take your leftover food home in styrofoam. Rather, ask if they have any paper products that can serve as a to-go container.

You have heard people say that one person can’t make a difference. But if we all make small changes to our lifestyles, big changes can result.