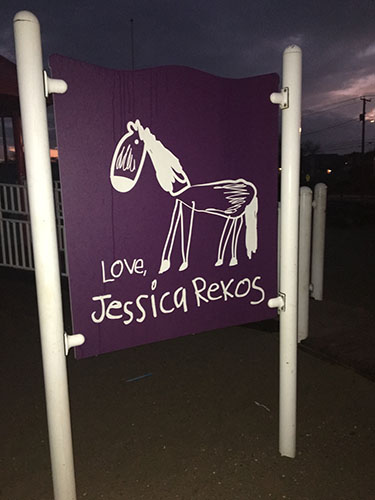 REMEMBERING THE VICTIMS: A playground built for 6-year-old Jessica Rekos, Sandy Hook victim, stands in Farifield, CT. There are 26 playgrounds built in honor of those who died in the Sandy Hook mass shooting.

Gun control: one of the most prominent political issues facing America today and nothing to be taken lightly. After mass shootings in Sandy Hook Elementary School, the Las Vegas Strip and most recently the Texas church shooting, something needs to be done.

The topic is argued a lot, but seemingly not enough if we’re still failing to take action and consequently failing to save lives.

Take Sandy Hook, for example, a massacre that shocked the nation and led to cries for change in the case of gun control. These cries were not completely ignored, but according to The Washington Post, each of the reform bills proposed after Sandy Hook were individually blocked by the Senate, including a measure for the expansion of background checks before gun sales, a measure 9 in 10 Americans supported.

It shouldn’t come as a shock that the amount of mass shootings taking place hasn’t been on a decline; virtually no change on the national level has been implemented. According to the nonprofit Gun Violence Archive, 38 mass shootings have occurred in America during 2017 as of Oct. 1, if adhering to the federal mandate defining a mass shooting as an incident in which 3 or more people are shot and killed.

As the so-often quoted second amendment states, we do have the right to gun ownership, but it seems as if this amendment lends to violence more than it does freedom and protection. It’s simple—people are dying, and America needs to do something about it. In fact, according to National Public Radio, the U.S. has the 31st highest rate of gun-related fatalities in the world, with 3.85 deaths due to gun violence per 100,000 people.  Countries ranked slightly higher than the U.S. include the Bahamas and Jamaica, both immersed in poverty. Compared to the rates of equally socio-economically developed nations such as Denmark (.14 deaths per 100,000 people) that also have much smaller populations, this number is, simply, way too high.

Addressing every single counter argument made by those who are so avidly against raising standards for gun control is impossible to accomplish with a limit of 800 words;  my focus is on those that are the most obvious and, frankly, the most ridiculous.

For starters, ownership of a hunting rifle or a pistol is much more reasonable than ownership of an AR-15-style assault rifle, one of the weapons used by the Las Vegas gunman in order to carry out the massacre of 57 civilians and injure over 500 others, according to The New York Times. These assault weapons are completely unnecessary for self defense (one of the main arguments for gun ownership in America), yet are still available for purchase and possession in all but six states and the District of Columbia, according to The Washington Post.

Although one of the least controversial of the proposed gun control measures, the National Rifle Association also actively opposes the implementation of universal background checks before the purchase of a firearm, while only 20 states legally require them before the transaction, according to The Washington Post.

One of the main arguments used by the NRA is that proposed gun control measures don’t necessarily stop criminals from getting firearms due to other means of purchase like the black market. In a political climate as controversial and tense as America’s today, however, it comes down to doing something in regards to the abnormally high rate of gun-related deaths and violence rather than doing absolutely nothing. One of the deadliest mass shootings in American history occurred just a month ago—how could we sit back and argue that we can’t do anything about it?

One of the biggest and unwarranted worries among gun owners is that an uptick in restrictive gun control measures will result in their guns being taken away from them. We need only look at Germany, a country with one of the highest concentrations of guns in the world and the tenth lowest rate of gun violence according to The Guardian. After a school shooting in 2009 in which 15 were killed, Germany made tweaks to their gun control regulations; a few include psychological evaluations required for anyone under 25 trying to purchase a firearm, and a mandatory certificate proving prospective gun owners can safely and correctly handle and store a gun, according to The New York Times.

Germany has experienced significantly less mass shootings since the one in 2009 that warranted these regulations to begin with, according to The Los Angeles Times. And although there is still sentiment against these regulations among some German residents, most still look at America in shock as shooting after shooting occurs and the government takes absolutely no action

Make a change and disrupt America’s stagnancy facing gun control—write a letter to your congressman, or strive to advocate (or vote!) for those who might actually take action towards limiting gun violence in a nation that touts freedom and ‘security’. Action must be taken now, and legislation is the best way to do so; people are at risk, and the life of another is more important than a dated American love affair with weapons.