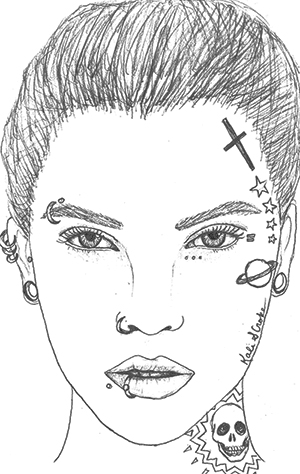 Everyone has seen a painting at some point in their lives. Whether it be a work by Van Gogh, Picasso or even your three-year-old sibling in a preschool art class, people go out of their way to appreciate and admire the beauty that these paintings have to offer.

Now imagine this same art on a different medium, not a canvas. Take a tattoo on a human body, for example. You would think that some people would still regard the art in the same considerate manner, but in fact, certain statistics prove the contrary.

According to the Pew Research Center, nearly 45 million Americans have at least one tattoo. In spite of the growing popularity of tattoos, there still lies an underlying unacceptance in society as people stigmatize tattooed individuals with degrading characteristics.

People shouldn’t have to be downgraded because of the art they decide to put on their bodies. Beat the stigma; instead of silently judging someone that has a tattoo, ask them why they got it, what it means, where they got it. Anything but the not-so-casual “Oh my god, you got a tattoo? Your parents actually let you get one?”

According to a survey on salary.com, out of 2,700 both inked and not inked people, only 51 percent of tattooed people would allow their children to get a tattoo. Although tattooed parents rarely even consent to their own children getting tattoos, it is eventually up to the individual to do what they wish with their body.

The same should be true to society in general. It is up to the individual whether or not they get a tattoo, so why stifle them with unnecessary comments about their self-expression?

Society boasts that it gives the benefit of the doubt when meeting a stranger. It is in our best interest to hold true to that positive outlook by keeping an open mind in spite of the stigma against tattoos.

If this body art was perceived just as we perceive artwork done on a canvas, people would simply be judged by the merit of the tattoo. But, it does remain a regular occurrence that people don’t discern body art as a work of art, but rather a detriment to their chances of getting a job in a desirable field or positive character assumptions.

Inked individuals shouldn’t have to suffer societal disapproval for wearing their art just because they made the brave decision to express themselves. It’s a declaration of uniqueness, not a reflection of bad life choices.