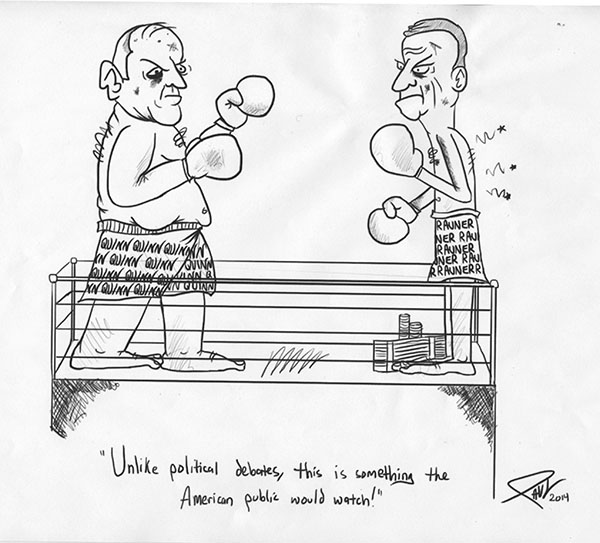 The midterm elections occurred again this November and despite the fact that they are often overlooked, they are important and relevant. These elections are the ones that hit closer to home. For us here in Illinois it decides our governorship and who represents each district.

The gubernatorial race was between incumbent Democrat Pat Quinn and Republican candidate Bruce Rauner. I’m sure many of you saw their back and forth commercials. Quinn released one commercial depicting himself as a regular guy mowing the lawn and Rauner responded with a commercial with Mike Ditka sponsoring him.

It’s difficult to tell who wins these commercial battles as they happen, but it seems that somewhere in all the showmanship we’ve lost sight of what is important: the politics.

To explain this, let us focus on one specific issue: education funding. The Rauner campaign argued that under Quinn, funding for schools dropped by half a billion dollars. In return, Quinn argued that it actually rose half a billion since he took office. Both aren’t necessarily wrong either.

Neither candidate wanted to tell the whole story, but rather present one that shines the light in their favor. This is the reality of politics today.

Their final debate a week ago also supported this position, as we saw each of them unleash a fury of criticisms towards the other candidate. All the while they both managed to skirt discussing the important issues.

Transitioning to an even more local level, we have the district ten race between the incumbent Democratic representative Brad Schneider and the former representative and Republican Robert Dold. These two have quite a bit of history between them, and if we wanted to make politics sound interesting, we might even call it a rivalry. Schneider won his seat in 2012 from Dold who now is looking to take his seat back.

The real irony is that these two are not so different but still find ways to attack each other. For instance, both are pro-choice and have similar stances regarding foreign policy.

Dold is a bit of an outlier in the Republican party; he supports extensions for unemployment insurance, a bill that was passed by the Democratic controlled Senate. Somehow this point of potential common ground between Dold and Schneider became the opening for an attack from the Dold campaign. Dold released a commercial that criticized Schneider for voting along party lines and listening to party leaders while praising himself for being an independent.

It goes to show you once again that the actual politics seem to matter less and less while the presentation and perception matter more, a big fault of our political system today.