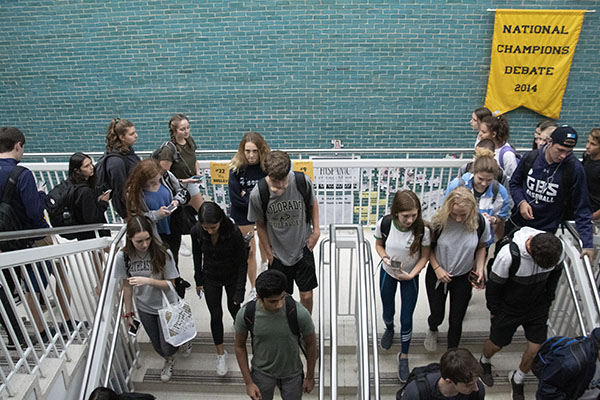 Hectic hallways: Weaving through the busy hallways, students try to get to class on time. There is an increase of students causing jam ups in the halls.

The 2019-2020 school year accounts for 3,197 students from all grade levels, making it the largest student population at South since the school opened,  according to Principal Dr. Lauren Fagel.

The number of students at South has reached an all time high due to Glenview’s history, according to Fagel. When The Glen Town Center, a shopping mall and neighborhood located in Glenview, was being built, it was predicted that the demographic of families moving in would account for families with high school-aged kids, according to Fagel; however, most residents were younger families.  Because families with younger kids moved into the neighborhood, those kids are now highschoolers.

“We’re at the biggest we’ve ever been so people think it’s from the incoming class,” Fagel said. “ [The biggest grade is] actually the seniors, which is even bigger than last year’s class.”

The combination of students from all grade levels comes to a total of 3197, Fagel said. Fagel said that there are 784 students in the freshmen class, 789 in the sophomore class, 793 in the junior class, and  830 in the senior class.

Fagel said that the Board of Education hires an outside consulting company to predict the amount of incoming students; they do analytics regarding the birth rate and the number of people moving in and out of the community. Another method of predicting the amount of students in each grade  involves asking the middle schools the amount of students in each grade, Fagel said.  Based on the two methods, they give an approximate estimate on the enrollment. Both of these methods have been fairly close to the actual number, according to Fagel. The student enrollment is projected to decrease after this year. According to Casey Wright, associate principal for administrative services, South has gone through many changes within the past five years  to accommodate the increase in students.

Besides the changes in classroom utilization, administrators have spoken with the instructional supervisors in each department which has helped the process flow more efficiently, Wright said. According to Dr. Kim Ptak, director of operations and purchasing for District 225, the concerns that parents presented were minimal.

“When parents started to see the rising enrollment, they wanted assurance that we would stay consistent with what Glenbrook North [class size].” Ptak said.

Although these classroom changes were convenient, getting to class on time can be hard sometimes, according to sophomore Elise Bauerschmidt. She noticed the pit stairs being at a stand still during passing periods while stairs at the end of hallways went unused. The pit stairs and outside the West Cafeteria are mains spots of congestion and can be frustrating, Bauerschmidt said.

“In the mornings, it’s  [busy] outside the cafeterias, and during passing periods it’s [busy] in the pit stairs, which sometimes are not even moving as your walking down them,” Bauerschmidt said.

Wright said that as some facilities may be at a current maximum capacity, the decrease in enrollment in future years will help the school run more efficiently.