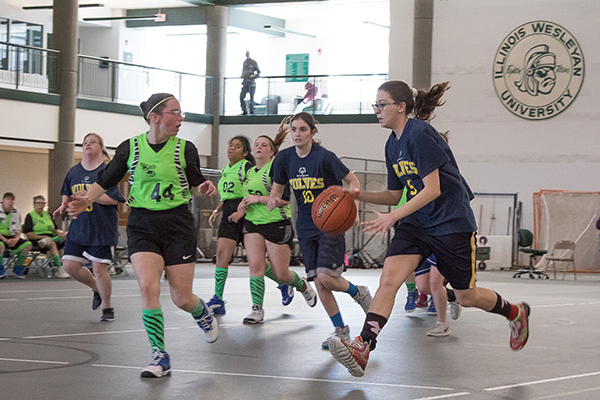 V-I-C-T-O-R-Y: Racing up the court, a member of the Glenbrook United basketball team, the Wolves, dribbles towards the basket. The Glenbrook United Special Olympics Team won four state titles in the four games they competed in on March 15-17. Photo courtesy of Christian Lantry

The Glenbrook United team is comprised of South, North, and off-campus students, Williams says. Students can participate in a variety of sports until the age of 22.

“Glenbrook United is a district wide team,” Williams said. “We also have started to develop what is called the Wolves: [members of Special Olympics] that are aging out. Some of our students receive services until the day before their 22nd birthday. Glenbrook United competes in seven different sports: track, soccer, flag football, basketball, volleyball, floor hockey, and golf.”

Students are placed on either blue or gold teams, based on their abilities, to ensure they compete at the right level with other peers, Pa’al Joshi, Glenbrook United Special Olympics head coach, says. This year, Glenbrook United sent four teams to State and each team placed, Williams explained.

In order to prepare for State, Glenbrook United students practiced about three times per week, including a practice with South’s varsity boys basketball team, Williams says.

“The Glenbrook South boys’ basketball team held a practice for us, as well as North, which is great to have the varsity athletes have an opportunity to play with some of our athletes,” Williams said. “We practice Tuesdays at Hersey, Wednesdays at Glenbrook North, and Fridays at the Northbrook Y.”

Glenbrook United is different than South’s TLS basketball team, as the TLS team integrates peer mentors with the players, and at State, Glenbrook United had strict guidelines to follow during games, Joshi says.

“Special Olympics follows IHSA [basketball] rules so you have to make a basket to count,” Joshi said. “There are no accommodations, but depending on the level of game, [rules] like traveling can be more lenient. TLS has many more allowances to help provide opportunities that one would not have in a typical basketball game.”

Sophomore Kannon Acocella, who served as a coach at some team practices, says that the energy of the team was obvious at the practices.

“It was a great time working with the kids,” Acocella said. “They really hustle and it was contagious. There was happiness all around. It was a really great experience and I’m so blessed that I could go through with it and be there for them.”

Before Glenbrook United left for State, South hosted a send-off on March 14 with the band, posters, and peer mentors, senior and peer mentor Allie Dubois says.

“It was just a cool experience to show their achievements,” Dubois said. “It went pretty well and it was very exciting because it was all their names and they got to showcase how they’re going to state.”

With the team’s success at State this year, Williams explained the meaning of this experience for those involved students.

“A lot of these student have never had a chance to play on teams before so this is really their first time, so not only [are they] learning the fundamentals and basketball skills, but it’s also learning how to be on a team and what it means to play together and not just individually,” Williams said. “The Special Olympics motto is all about ‘if I cannot win, give me the right to be brave and trust and [have] the courage to do so.’”