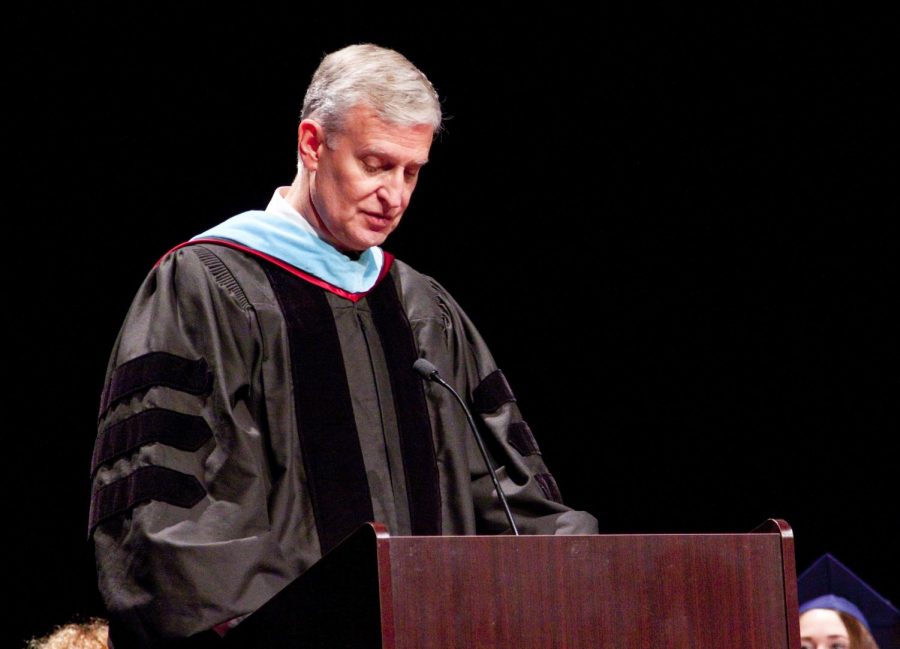 Sentimental Speech: Speaking at the 2018 graduation, Riggle reflects on his cherished memories of the graduating class. On this day, Riggle officially announced to faculty his plan to retire.

Dr. Mike Riggle, Glenbrook 225 Superintendent, announced his plan to retire last June, according to Principal Dr. Lauren Fagel. The search for a new superintendent began in September and will carry onto January, says Skip Shein, president of the Glenbrook 225 Board of Education.

Glenbrook 225 is working with BWP & Associates, a consulting company that assists schools in identifying candidates for leadership positions in education, to aid this process, Riggle says. On Oct. 3, a public forum was held for faculty, parent groups, students and community leaders to share the strengths in the community, areas for growth and criteria for the new superintendent, Fagel says.

“[BWP & Associates] works with our board to create a job posting and a profile,” Fagel said. “The search firm will screen candidates, a group of finalists will be brought to a committee… [and] then [the Glenbrook Board of Education] will eventually hire someone.”

The Glenbrook 225 Board of Education’s main goal is to determine who the new superintendent will be, Riggle says. In addition to working with BWP & Associates, Riggle says he is assisting and supporting the process as much as he can.

“I work with the principals and the building administrators to make sure we’ve identified people to attend the forums we’re structuring,” Riggle said. “I’m doing a lot of leg work in trying to support the process.”

Having experience in education is greatly desired because it would be difficult for a superintendent to understand the needs of teachers if they have never had any experience in a classroom beforehand, according to Shein. In agreement, Fagel believes that the new superintendent should be someone who has experience and is authentic.

“I think it’s really important that when you’re in a leadership position, you’re not someone who gets carried away with the power,” Fagel said.  “Someone who is level-headed is really important [because] it’s a big responsibility with a lot of things coming at you at once.”

“When Dr. Riggle tendered his desire to retire, the timing was not good,” Shein said. “Toward the end of the school year is the most difficult time to attract a candidate. We have extremely high expectations. [Riggle] is an outstanding administrator, he’s an outstanding person, and to replace someone like that is very difficult. In addition, there’s a shortage of teachers and administrators now, so the demand is much greater than the supply.”

Riggle’s most noteworthy memory of being superintendent was when the Glenbrook 225 District prepared new tax referendum dollars adequately so that they would not have to ask for another referendum from the community.

“I think there have been many district initiatives that have been important,” Riggle said. “I think that financially we faced a challenge back in 2008. For two to three years, we had made a  commitment to the community that not only we would prepare new tax referendum dollars appropriately, but we would prepare things for the future and not have to go back to the community and ask for another referendum. I’m very pleased that we have been successful.”

Although Riggle has more time to spend with his family now, Fagel says that she is sad for the district, as Riggle has left a memorable mark in the Glenbrook community.

“[Riggle is] one of very few people who can do the job [of a superintendent] with such dignity and stability,” Fagel said. “He’s just a really solid leader for the district… He’s built and sustained a lot of trust.”

Watch for the Oracle’s profile of the life and career of Dr. Riggle in an upcoming issue.