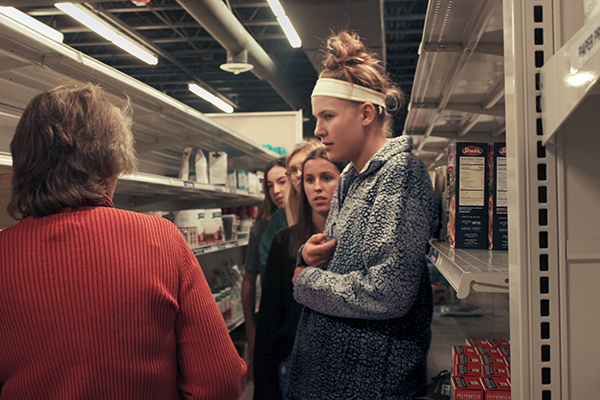 “This is a really big event to run and there’s a lot of different moving parts,” Newell said. “By splitting it up into different committees and giving each person something they’re in charge of, it’s easier to streamline.”

The Canned Food Drive has undergone significant changes in past years, such as the elimination of an official goal of 100,000-plus cans, Newell says. Instead, Student Council is now focusing on a point system.

“We’re still bringing in a ton of cans,” Gregory said. “But the cans that we’re bringing in now are much more effective in helping out the pantry than we were before.”

The point system also creates valuable competition as it motivates the student body to participate in the Canned Food Drive as different clubs and grade levels can compete with each other by bringing in the most amount of cans, Gregory says.

“Without competitions, it’s hard for people to really get into it,” Gregory said. “The point system is good because it helps get people excited about donating cans.”

Josh Koo, assistant principal of student activities, believes that contributing to service projects, such as the Canned Food Drive, is a way for students to realize that the world is bigger than themselves.

“It’s about your heart,” Koo said. “It’s about the people, rather than ‘let’s hit a target goal.’”

Brickman says that there is a common misconception that the Glenview community lacks people in need, which she believes affects participation in the drive.

“That’s our number one challenge,” Brickman said. “The need is here, but there are people who don’t believe it or don’t  want to believe it.”

Koo says that Glenview’s reputation affects community member’s attitudes towards people in need, and that charitable events, like the Canned Food Drive, can alter such attitudes.

“We come from a very privileged community, and someone who has privilege can do one of three things,” Koo said. “You can ignore your privilege, you can feel guilty about your privilege, or you can use it to benefit others, and that’s what we’re trying to focus on.” Student Council members are not the only people able to get involved in the drive, Koo says. Students interested in helping out with the Canned Food Drive may go to the Student Activities Office and ask about volunteering.