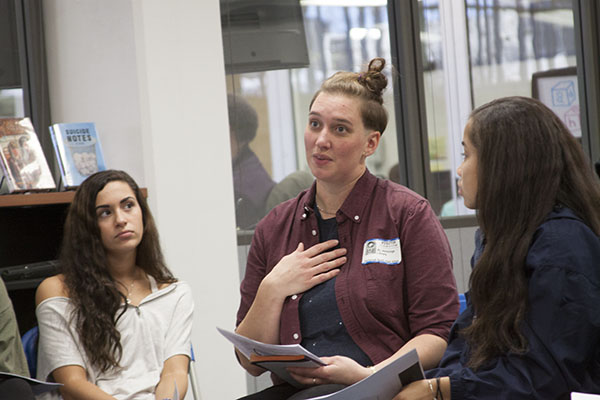 SOCIAL TRANS-FORMATION: During a discussion in the library, sophomore Emily Joseph listens intently to the speaker, AJ Jennings, who came to GBS on Nov. 19 to discuss transgender awareness in the community.

South’s Gay Straight Alliance (GSA) held its first Transgender Awareness Week during the week of Nov. 16. The club hosted two events including a showing of the documentary Growing Up Trans and a discussion with a speaker from the Illinois Safe Schools Alliance.

According to GSA Co-president Jess Melchor, this was the club’s first time holding events relating to transgender issues. Melchor believes that acknowledging transgender issues was important because it is an issue that is not widely discussed.

“This is a topic that I feel like a lot of people don’t really know about, and that’s not really their fault, it’s just because no one really talks about it,” Melchor said. “It may not be prominent in [everyone’s] life, but we just wanted to raise awareness and spread knowledge because there are people that need a ton of help and support.”

GSA club sponsor Katrina Prockovic says that a goal of the awareness week was to allow students to begin to feel comfortable thinking about transgender issues. By giving all students the opportunity to expose themselves to the concept, Prockovic hoped it would begin to foster a more accepting environment.

“I hope [transgender awareness week participants] felt comfortable asking questions, and even all of us as a community acknowledged what we don’t know, but that we’re open,” Prockovic said.

In addition to attending the awareness week events, Principal Lauren Fagel attended a gender-in-schools workshop along with the administrative teams from both GBS and GBN. The workshop was led by Jennifer Leininger from Lurie Children’s Hospital and was held on Dec. 2. Fagel hoped that by attending this presentation, she and the other administrators would be able to learn how to provide more support to transgender students.

“I’m excited for that because I think that from there we can talk as a building leadership team about how we want to provide opportunities for teachers and staff members to talk about listening for certain things, how to respond; what’s okay and what’s not,” Fagel said.

Fagel says that making all students feel comfortable in their school environment is one of her top priorities.

“I feel like we really are lucky to have a lot of student support personnel, so I know that the students we do have who are transgender have had the opportunity to sit with […] whoever their [support] team is, and we’ve been able to give them what they request,” Fagel said.

Similar to Fagel, Prockovic believes that it is important for the South community to be accepting and accommodating towards students with all types of backgrounds. According to Prockovic, the real main goal of Transgender Awareness Week was to help students become more accepting of their peers in general.

“As part of GSA, what falls to us is trying to get people [to be] more accepting about gender and sexuality,” Prockovic said. “But there are other clubs working hard at this school to provide other pieces of that, where the end goal should be that we’re accepting of everyone.”