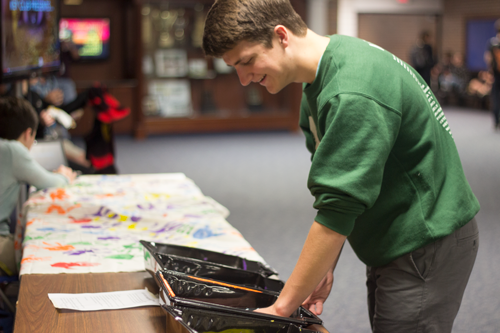 Key Club participated in a variety of events this past year, with their last event taking place on May 29 for South science teacher Linda Kocian.

One of the recent service events that Key Club hosted was “Halting Hunger” on April 16. According to Club Sponsor Josh Koo, the event was an effort to help stop hunger both locally and globally and was featured on ABC7 News.

“We were talking with our leaders—they said we do a lot of food-based stuff in April—why don’t we make that one, big, collective [event or] one, big push where we can have a large group of people do it together?” Koo said. “So what we ended up doing [was] Halting Hunger.”

According to Katie Hauldren, Key Club leader, the event entailed packing lunches for children at a school in the city for the local aspect, and playing games on freerice.com, a website that sends rice to impoverished countries in exchange for answering trivia questions, for the global aspect of the event. Additionally, students created diaries for kids in African orphanages which they sent along with monetary donations to help with food.

“We thought the event was a good way to wrap up helping a bunch of people into one main theme,” Hauldren said.

According to Koo, the following day about 50 volunteers traveled to Brown Elementary School in Chicago and shared the lunches they packed at “Halting Hunger”.

Most recently, 60 Key Club members attended We Day, an event celebrating participation in volunteer service, according to Koo. The event featured celebrities, live music, and motivational speakers that encouraged service among young adults in Illinois.

“There were tons of celebrities, but every single one had the same mission, the same goal, the same theme of keep on serving, keep on volunteering, and dream big,” Koo said.

Sophomore Lori Steffel, Key Club leader, was among the students who were able to attend We Day.

“[The speakers] talked about their experiences and how they were able to move past their differences and turn that around to help other people,” Steffel said.  “It was inspiring and motivating, and it was a really uplifting experience.”

Senior Nate Turk, Key Club president, also attended We Day. According to Turk, this event takes place around the country and focuses on inspiring the youth to make a change in the world.

In addition to attending the event, GBS was honored as one of the premier high schools in the state for its commitment to community service and volunteer work, according to Koo.

“The day before, a couple of our leaders went to a special banquet where they congratulated us for being the champions of service in Illinois,” Koo said.

On top of all of this, Key Club is hosting Kolor 4 Kocian (K4K) to raise money for Kocian, who has been battling cancer since the fall of 2014. When it begins after school, students can expect games, music and a massive “color fight”, according to Koo.

According to Hauldren, the connection made with the South community while planning the event made it even more worthwhile.

“I feel happy that we’re helping someone that we actually know and cherish […] Even though helping people globally is nice, it feels even better when you know the person,” Hauldren said.