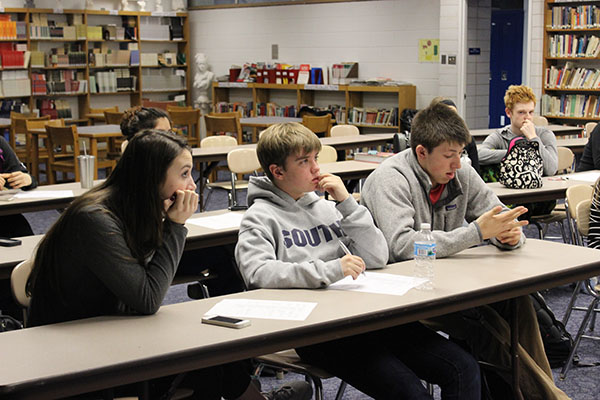 South will be hosting its first annual Model UN conference, GBSMUN, for over 200 students on April 25.

“Last year we won Nationals and we’ve been ranked in the top 25 in the Midwest consistently, so every year our team is getting better and better,” Kosmidis said. “What we recognized [is that] the top teams in the nation and also the region also host their own conferences, so that was kind of the next step.”

“[GBSMUN] was also about incorporating the funding for it because most one-day conferences are sponsored by universities, so we’re also unique in the fact that it’s completely GBS-sponsored,” Kosmidis said.  “We’re not getting any outside sponsorship from another university […] so we really wanted to develop. It’s our strength, it’s our program and it’s our funding as well.”

The funding efforts were facilitated by two fundraising chairs, junior Anushka Haldar and senior Stephanie Smelyansky, according to Kosmidis. The two reached out to local businesses to obtain food and office supplies for the conference. Also contributing to the conference is a 25-dollar entry fee and year-long fundraising efforts, Kosmidis said.

“They [the fundraising chairs] were able to get lower prices for us,” Kosmidis said. “They were able to negotiate a lot of fair deals, so I think all of their hard work has really helped to make it cost efficient.”

The profit from running and hosting the conference will go towards funding the team’s travel costs for conferences, Kosmidis said.

“To go to other conferences outside our region, the biggest cost is plane tickets, so we really want to be able to go somewhere in the future and travel either [to the] West or East Coast,” Kosmidis said.

According to senior Justine Kim, some of the people from these conferences will be attending GBSMUN. Kim, chair of the European Commission, is nervous about the potential for her former competition to become her subject of judgment as a chair.

“It’s weird because [delegates] usually only see one side of [the conference], and now we are really experiencing what is happening behind the scences,” Meehan said. “I think it’s a really cool, new perspective.”

However, Meehan has taken his perspective as a delegate and applied it to how he hopes to manage his sector of GBSMUN, which is running the crises and simulations of the conference.

“People always complain whether or not crisis is good, and I’m really nervous they won’t think it’s up to par,” Meehan said. “I know as a delegate that’s the first thing I complain about, and being the head of crisis and simulations adds that pressure.”

Despite these worries, Kim is confident that GBSMUN will prove the Model UN team can be successful as competitors and as hosts.

“I think we’ve proven that we’re a very good Model UN team in terms of competition,” Kim said. “This is our opportunity to show that not only can we excel when we compete, but we can also excel in actually running our own conference.”